Skip to content
Exclusives FEATURED
August 22, 2020 tmz editor
A file image of a police officer holding a pistol
Detectives from the Directorate of Criminal Investigations on Saturday, August 22, arrested two suspects in connection to the shooting of a 28-year-old man, Kevin Omwenga, at Galana Suites in Kilimani estate.

The investigative body disclosed that a man by the name Robert Bodo was in possession of a mini Ceska firearm with 13 rounds of ammunition when detectives nabbed him alongside Chris Obure.

“Detectives based at Kilimani have this morning arrested Robert Bodo and recovered a Mini Ceska firearm with 13 rounds of ammunition suspected to have been used in the fatal shooting of a 28-year-old man at Galana Suites in Kilimani,” reads the statement.

The firearm will be used as an exhibit and will be subjected to ballistic analysis.

In a police report, the deceased’s brother, Wycliff Omwenga, narrated that he was in preparing dinner in the kitchen when he heard a gunshot.

On approaching the direction where he heard the gunshot sound emanate from, Wycliff found Kevin lying, face down, with blood oozing from his chest. Bodo, on the other hand, was still in the room but in a hurry to leave.

Wycliff then rushed his brother to the Nairobi Women’s Hospital Adams branch, where he was pronounced dead on arrival.

The body of the deceased has been taken to Montezuma mortuary, where a post-mortem will be conducted.

The death came a month after a woman’s body was found in a flower bed by workers at Santonia Court in Kilimani, Nairobi County on Saturday, July 18.

Sheila Njeri Murage’s body is said to have been oozing blood from her nose and had some back injuries when the workers found her. 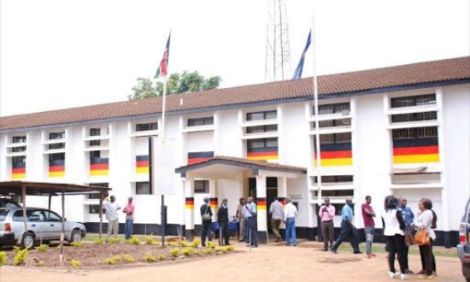 Police officers and citizens pictured outside Kasarani Police Station. Naomi Theuri reported that her father was missing at the station on May 18, 2020.

‘Tumeachana so many times,’ DJ Mo speaks on his imperfect marriage