The first puzzle is the charges that will be pinned on one of the suspects Chris Obure.

With Robert Ouko set to face murder charges for reportedly shooting Omwenga, Obure’s charges have not yet been disclosed as detectives struggle to find ways to connect him with the murder.

This is despite Obure’ gun being used to shoot Omwenga. This translates to the second puzzle which is ascertaining how Obure managed to get back the pistol after surrendering it to the police in 2017 following an altercation at a night club. 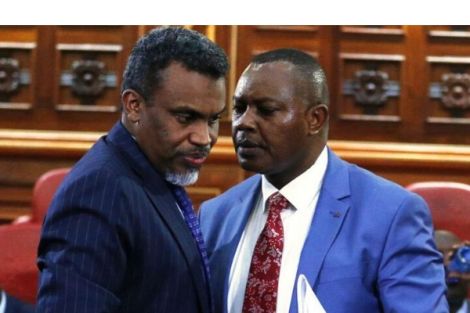 DPP Noordin Haji and DCI George Kinoti in Parliament in 2019

On Thursday, August 21, DCI Kinoti disclosed that he wrote to the Firearms Licencing Board seeking to find out how Obure got hold of his seized gun.

On the same day, Kinoti indicated that he recovered two more guns from the office of Chris Obure located along Galana Road, Nairobi.

He also sought to find out whether the guns were licensed or not.

The third puzzle is linking Omwenga’s murder case to the fake gold syndicate. Before he passed away, the deceased was alleged to have been planning a trip to Dubai to seal a fake gold deal.

Detectives are analyzing data retrieved from his gadgets and communication between him and the two suspects, Ouko and Obure, prior to his death.

“We are investigating to establish the truth. This is shocking and cruel,” Kinoti stated.

Omwenga was buried on Saturday, August 29 in Kisii County. His brother has, however, stated that the investigating officers have not yet shared details of the case. 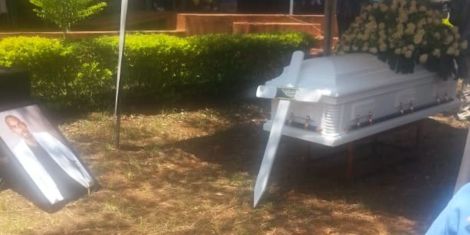 A coffin holding the remains of the late Kelvin Omwenga during his burial on Saturday, August 29