The old lady was nabbed on Thursday, September 3, with bhang worth a street value of Ksh 500,000.

The suspect had disguised the 500 rolls of marijuana as bales of mitumba clothes in a matatu she had boarded.

Police managed to intercept her following a tip-off from members of the public.

Mlolongo Police Station OCS Joaquem Kangangi disclosed that the woman was transporting the drugs to Tanzania, through Machakos County.

Athi River Sub County Police Commander Catherine Ringera lauded her officers for apprehending the woman as she reiterated that the government had heightened its fight against illegal drugs.

Ringera lamented that the 70-year-old was part of a network which targetted teenagers and students who were forced to sit at home after schools were closed down by Education CS George Magoha.

“The arrest of this suspect is a big boost to the fight against bhang peddling. We are on high alert to ensure that we curb the drug abuse menace that is adversely affecting the young generation,” Ringera stated.

The old lady gave up names of suspects in her ring with police assuring residents that they would track the other suspects and druglords.

The suspect spent the night in jail awaiting arraignment on Friday, September 4.

On May 13, police destroyed bhang valued at Ksh 2 million that had been planted in Aberdare Forest. In June, they also burned down a Ksh 4.5 million consignment in Isiolo County. 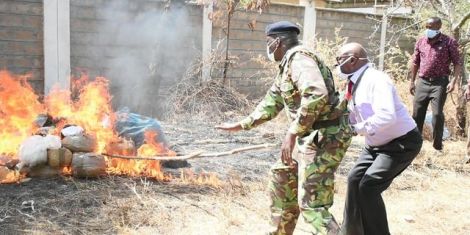