Skip to content
Entertainment FEATURED Life Style Radio & TV
May 29, 2020 tmz editor
Asha Mwilu with a colleague on October 20, 2016.
On Friday, May 29, Citizen TV Special Projects Editor, Asha Mwilu, announced that she would be leaving the media house to launch her own start-up.

Speaking to Tmz.co.ke, Mwilu stated that today was her last day at the renowned media station.

“I’m launching my own media start-up,” Mwilu told this writer. 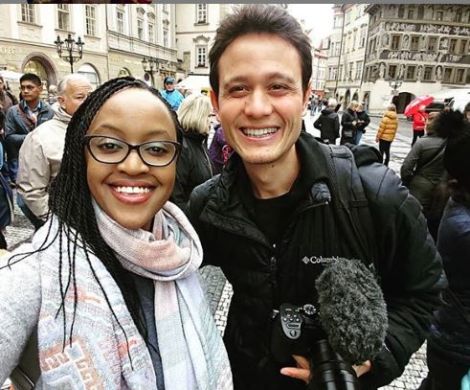 Mwilu was grateful to have worked under the guidance of her colleagues, Joe Ageyo, Linus Kaikai, Pamela Asigi and Jamila Mohamed.

The media, like many other sectors in the country, has been experiencing difficulties brought about by effects of the pandemic. This has been evidenced by increased staff layoffs, workers sent home on unpaid leave while others take pay cuts and in the most drastic cases, media houses considering shutting down operations.

Despite this fact, Mwilu says that she is ready for the challenge, adding that the media industry has a lot of opportunities as well.

“The industry is looking grim at the moment with media houses closing shop and people being fired but I think that there are opportunities that we journalists can tap into and that’s what I want to do,” she stated.

Additionally, Mwilu disclosed she would share more when the project was ready and went on to thank her followers for giving her feedback.

“I can’t talk about what I am launching at the moment because it is not ready,” she stated.

“And to all of you incredible people who gave me feedback, constructive criticism and such great engagement on my stories. Thank you. I can’t wait to share my new projects with you! A hint of what’s next #Debunk,” she added.

Mwilu joins other journalists who have chosen to branch out, starting up their own media houses.

In 2015, investigative reporter John Allan Namu left KTN and started his own media house known as Africa Uncensored which focused on investigative features.

Namu stated that his passion for in-depth investigative features led him to open the media house.

Julie Gichuru is another journalist who decided to go solo after a stellar career at Citizen TV and KTN.

She started Arimus Media Limited which oversees the production of quality African content such as Africa Leadership Dialogues, the Great Debaters Contest and entertainment series such as Maisha, Glam Show and Trading Bell.

Awww! Couple that was conned by wedding planner taken on a honeymoon by Kiss FM