COTU secretary general Francis Atwoli on Saturday, September 12, addressed reports that he has been hosting drinking parties at his Kajiado home.

Speaking during the requiem mass for the pioneer Church of God bishop Byrum Makhokha, who died last month at the church’s headquarters at Kima in Vihiga County, the vocal leader denied the claims, stating that his meetings were not drinking sessions.

“I want you to listen to me carefully, my Kajiado home played host to strategy meetings and not drinking sessions. The meetings were targeted at detailing the future of the Luhya community and nothing else,” he asserted. 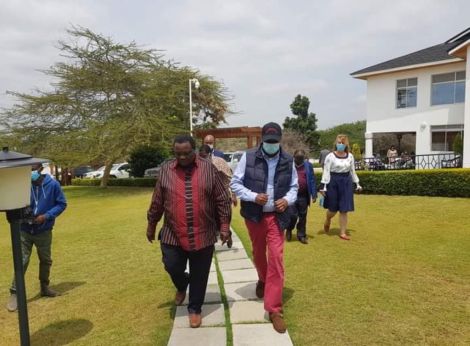 Atwoli’s Ildamat home is fast transforming itself into Kenya’s new Ichaweri, Mzee Jomo Kenyatta’s Gatundu residence where political careers could be made in an instant.

Kenyans were quick to point out that the infamous Senate purge on leaders linked to Deputy President William Ruto, came after the April 13 meeting, at the posh Kajiado getaway.

On May 29, the mansion played host to Kakamega Governor Wycliffe Oparanya and Devolution Cabinet Secretary Eugene Wamalwa. Atwoli went on to christen them as the Luhya spokespersons.

He has since clarified that ANC Party leader Musalia Mudavadi is still the overall leader of the community, but warned him about missing out this time around

“The time is now, akichelewa apate mwana si wake asimlaumu mtu yeyote, (if he acts late and misses out on this chance, he should not blame anybody),” Atwoli stated, sparking laughter from the crowd as well as Mudavadi who was standing right behind him.

Mudavadi accepted the mandate bestowed upon him and urged the locals not to abandon him.

Atwoli made national headlines on Sunday, September 13, with allegations of his grand plan to see President Uhuru Kenyatta getting a clean slate, and another shot at the presidency.

Political pundits have argued that the call for a referendum could be a move to change a few clauses that could affect the 2022, General Elections.