In the video on Betty Kyallo Lately, the former K24 TV presenter was driving around town with two passengers when she approached a junction.

As the lights gave her the clear to enter the junction, an ambulance emerged from the opposite direction nearly resulting in an accident.

The journalist, however, quick to react, slammed on the brakes in time to avoid a collision.

Watch the Video Below:

“My heart is beating, the ambulance just came from nowhere. It came from a corner and I could not see it,” she exclaimed.

Composing herself after the near-crash she further stated that she had the right of way as the ambulance sirens faded into the background.

“That could have ended badly,” the passenger remarked as the proceeded with the journey.

Betty further gave an update of how her beauty salon Flair With Betty was performing noting that she had a regular flow of clients since its highly-publicised launch.

“I am really grateful to God because sometimes you can open a business but there is nobody who is interested in promoting your venture,” she stated.

The former K24 TV anchor unveiled an improved version of her salon on June 27, in an event graced by Ida Odinga among other high profile personalities.

In an interview hosted by Felix Odiwuor (Jalang’o), the anchor stated that the salon was fully furnished with a massage parlor, a private VIP room for women, a barbershop and a kids salon. 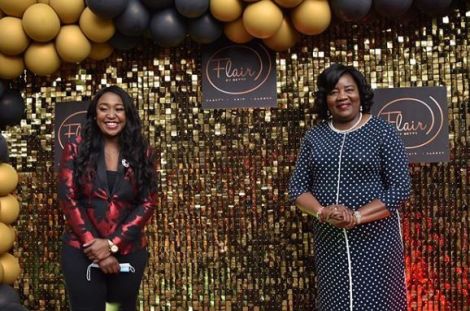 Media Personality Betty Kyallo (left) and Ida Odinga during the launch of Flair With Betty on June 27, 2020