On Saturday, November 21, Ekeza Sacco released a video noting that over 4,000 customers with shares worth less than Ksh 50,000 had received their refunds.

The video also indicated that over 1,000 customers who had invested over Ksh 50,000 in the company would receive parcels of lands in various counties.

“The Government and precisely the Commissioner of cooperatives in conjunction with Bishop Gakuyo have today paid more than 4,000 members who had savings below Ksh 50,000 in Ekeza Sacco, while more than 1,000 had above Ksh 50,000 converted their investment to prime properties in Real Estate. 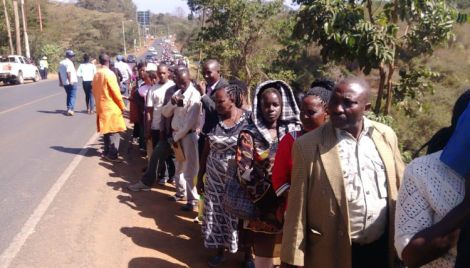 “Ekeza will pay up to the last shilling,” read a statement from the Sacco.

Those who had invested between Ksh400,000 and Ksh420,000 would have their parcels at Kilimambogo along Tala-Kilimambogo Highway while others are located in Gwa Kung’u in Nyahururu.

A representative from Ekeza Sacco, however, declined to reveal to Tmz.co.ke how long the exercise was likely to take.

The government had taken over Gakuyo’s Ekeza Sacco to protect thousands of investors.

The action was based on an audit which revealed that over Ksh1.5 billion had been embezzled from the Sacco.

The refund process commenced in January 2020. Gakuyo’s plan was to pay 1,500 members in the first phase. It involved those who had saved Ksh 5,000 downwards. The second phase was for members he owed Ksh20,000 to Ksh50,000. Investors who were demanding up to Ksh200,000 would be refunded later on.

Gakuyo, at the time, detailed that the process would take up to two years, given the nature of liquidation strategy he was implementing.

Bishop Gakuyo addresses a gathering in Kiambu in 2018