Skip to content
Exclusives FEATURED Latest Life Style
May 28, 2020 tmz editor
Kenyan business mogul Chris Kirubi strikes a pose.
FILE
Kenyan Business mogul Chris Kirubi has been known to be a man of few words, a doer if you may. He has successfully managed to keep his personal affairs to himself as he went about building an empire that spans across multiple countries.

However, he once opened up on his marriage and family life while speaking to Sophia Wanuna, during a candid interview that was held at one of his homes back in 2015.

“I have two kids, my son works somewhere in Brussels, he works for DHL, he’s a global leader there and is in charge of Europe in what he does.

“My daughter is here with me and dabbles in business as she’s a director in several companies and her mother as well. I happen to see her from time to time as well,” he revealed. 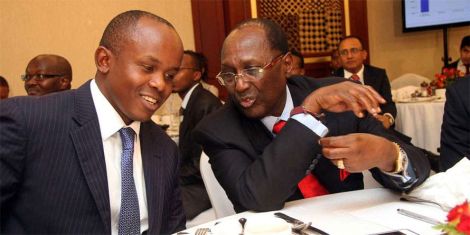 “It was an interesting life just looking after the kids, taking them to school, working with them on their homework and you know, going shopping and all this manner of things that families do. It’s a good life and I miss it at times,” he added.

On what he missed most from his earlier days as an enthusiastic family man, Kirubi highlighted the bond he had with his children growing up.

“I miss tucking in the kids at night and helping them out with their work,” he stated.

Interestingly he said that he actually missed some of the quarrels and the consequent makeup and reconciliation that came after.

“To have a family and bring up a family is the biggest success one can achieve,” he said.

“But it’s important to note that it takes two to tango and if there isn’t absolute commitment from both parties then it simply can’t work,” he emphasized.

Growing up in Rwathia village, Murang’a County, the young CK – as he’s fondly referred to – was forced to grow up at a very young age after losing his parents when he was just 8 years old. Being the firstborn of the boys in his family, he had to knuckle down and find a way to look after his siblings.

With the help of individuals he termed as guardian angels, he was able to get through school where his drive to be the best got to the next gear.

His work ethic is something he has held on to date, with the tycoon confessing to working to up until midnight long after he set up his empire.

“When you are involved in a business, you have to devote yourself to it. I consider every employee working under our banner as part of my extended family,” he elucidated.

“I always set myself new goals and I try to achieve them and not hitting them is what keeps me up at night, if for example, I didn’t make a call that I had set out to, I get very worried,” he added.

In 2011, he made it to the list of Africa’s richest people by Forbes Magazine with his total net worth pegged at Ksh3 billion ($300 million) at the time.

CK currently runs a vast network of companies that employ tens of thousands of people he happily calls family.

Mapenzi moto moto! Celebrities who’ve been through thick and thin together