YY had landed the chance to perform by mere lack after Daniel Ndambuki’s microphone got a hitch and someone was needed to kill the time.

Embracing the opportunity, YY took to the stage and made the most he could from it. Joke after joke, he left his audience busting in laughter. 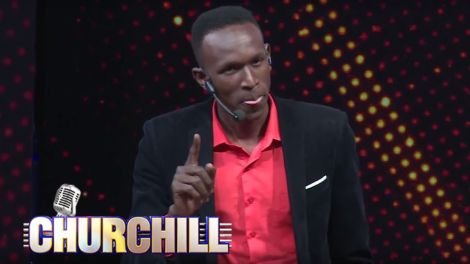 YY Comedian during a performance on Churchill Show in July 2015

Kinuthia, who was part of the crowd, reached out to the comedian and gave him a stash of cash.

On seeing this, the crowd rallied each other and soon a basket was circulating with the thousands of contributions from the audience.

For YY, it was pure bliss.

Just hours to the performance, his uncle, whom he used to reside with, had chased him from his house.

His uncle had asked him to choose between being housed at his place or going for the show, which always kept him out late.

YY chose the later and throughout his performance, he did not know where he would sleep that day.

However, the money contributed by the audience helped him get a place he would stay for the night.

After a stint at the show for three years, YY quit in 2016. He appreciated the Churchill Show for helping him grow his talent.

Ukipewa Utawezana? Photos or Willis Raburu’s hunk brother, who will make you want to dump your man