Chief Justice (CJ) David Maraga was issued with a 14-day notice to kick-start the process of dissolving parliament for failure to enact the two-thirds gender rule.

In a letter dated September 9, addressed to the CJ, the United Green Movement (UGM) Party Women League threatened to march to his office once the 2 weeks were up.

“If we do not see any action from you within two weeks of this statement, we will lead our women within the meaning of Article 37 of the constitution as read together with Article 3 in defense of the Constitution to your office.

“We shall then make these demands face to face in your office, as we seek an unequivocal response from you,” the letter reads in part. 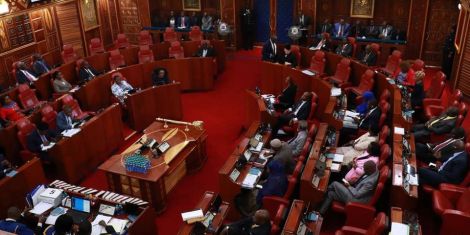 Members of Senate in session at Parliament Building Nairobi on January 29, 2020.
TWITTER

They went on to direct CJ Maraga to advise the President to begin the process of dissolving the House as it was in clear breach of the constitution.

Parliament has failed to pass the two-thirds gender rule more than 4 times.

In 2016, the then-Attorney General Githu Muigai warned Parliament of a possible dissolution as per the law.

“You know what happens when arms of government refuse to obey its constitution. The nation begins to glide into anarchy,” UGM Nairobi County Chairperson Malasen Hamida stated during the press briefing.

She further reiterated that a 10-year wait for Parliament to enact a Constitutional directive was simply too long.

Section 27 of the Constitution requires both levels of government to ensure that neither gender has more than two thirds of public officers, whether elected or appointed.

The High Court in 2017 ordered the National Assembly to craft laws that would enable implementation of the two-thirds gender rule.

Watch the UGM press briefing below: