The court found that the complainant who was suing the CJ for child support had not properly filed the case as she had failed to pay the requisite fee of Ksh655.

Lawyer Danstan Omari who was representing the CJ stated that the accuser failed to show up in court.

Watch the Video of Lawyer Danstan Omari after the ruling:

“This was a stage-managed play to annoy, frustrate, disparage and ridicule and bring disrespect to the office of the Chief Justice,” Lawyer Omari stated.

Omari had earlier in June responded to the claims by the woman going further to debunk the birth certificate presented by Kwamboka pointing out glaring mistakes in the document.

Among the errors he noted, included a fictitious registrar of births by the name F.O Shamwata in the country.

He added that there has been no register officer by the name N.P Otieno in the Nairobi office hence indicating that the certificate was fake.

The lawyer maintained that there had been intense pressure for Maraga to resign before his term came to end on January 12, 2021.

Following the ruling the lawyer assured that they were ready to defend the CJ in all the cases that would be presented to malign his name.

Earlier in July, 2020, Nominated Senator Millicent Omanga waded into the drama with the politician offering the woman Ksh100,000 in empathy after she faced attacks on social media.

Another attack on Maraga emerged in June 12, when residents in Nairobi woke up to mysterious banners of Chief Justice David Maraga plastered along major roads in the city.

The posters were put on a flyover along the Thika Superhighway as well as other roads in the Central Business District (CBD). The banners that left many bewildered alluded to a big exposé on the President of the Supreme Court. 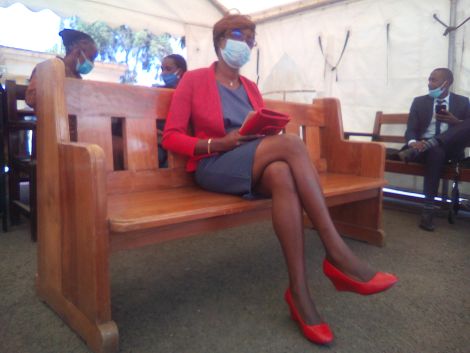 Kanini Kega Locks out Rent Defaulters From His Apartment [VIDEO