Weeks after his transfer, the 2nd term legislator gave an update on his condition to Kenyans.co.ke. 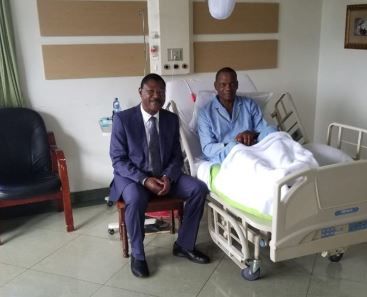 Bungoma Senator Moses Wetangula with Kabuchai MP James Lusweti Mukwe at his hospital bed in May 11, 2020.

“Three weeks ago I had a severe case of gout with the swelling starting from my big toe and all the way up to my knee. I was in so much pain,” he told this writer over the phone.

Seemingly in better spirits, the MP stated that having seen a specialist from the Nairobi Hospital, the infection was clearing up as he was responding well to the medication.

He added that he had received visitors with Bungoma Senator Moses Wetangula making a trip to his hospital room on Monday, May 11.

Lusweti further revealed that he hadn’t been keeping tabs with the happenings in Parliament since he was admitted in the hospital.

He was however excited and optimistic to get discharged soon as his conditioned improved.

Gout is a common form of arthritis that is exhibited by sudden, severe attacks of pain, swelling, redness, and tenderness in the joints, often the big toe.

A Clinician, Dr Jeremiah Thiong’o explained to this writer that the mechanism underlying the increased risk for nocturnal gout flare is unknown, but suspects include lower body temperature at night (leading to a higher risk for uric acid crystallisation), dehydration during sleep or periarticular dehydration resulting from sleep position, and a nighttime dip in blood cortisol levels.

He said that in addition to intense joint pain, one could experience a limited range of motions due to the swelling as well.

The doctor further explained that gout is caused by high levels of uric acid. Pain and inflammation occur when too much uric acid crystallises and deposits in the joints.

He added that people have an increased risk of gout due to diet that is rich in meat, beverages sweetened with fruit sugar, have high alcohol consumption, are obese and medical conditions such as high blood pressure, diabetes, and kidney diseases.

Dr Edwin Mutisya, a general practitioner observed that Kenya’s prevalent nyama coma and alcohol culture provides a perfect breeding ground for this disease to flourish and is now one of the fastest-growing problems.

“The age group of patients suffering from this condition has come down from people in their 40s to as young as those in their 20s,” he stated.

He further explained that gout mainly affects men as women are protected by estrogen until they reach menopause then they become equally vulnerable. The disease is further complicated by hypertension, diabetes, and high cholesterol. 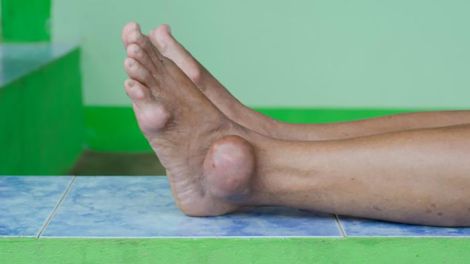 “The most effective way to treat gout is by the correct use of prescribed medication and dietary modification,” Dr Mutisya advised.

Preventing gout is by drinking plenty of fluids while limiting how many sweetened beverages you drink, limiting or avoiding alcohol and opting for low-fat dairy products and limit your intake of meat, fish and poultry as well as maintaining a desirable
body weight.

Airtel Hits The Spot With the New MyAirtel App