The High Court has declared Executive Order Number 1 of 2020, issued by President Uhuru Kenyatta, as unconstitutional and proceeded to nullify it.

The president sought to place the Judiciary, Tribunals Commissions, and Independent Offices under the Executive in the order.

Law Society of Kenya (LSK) filed the petition on June 17, 2020, having the Office of The Attorney General and Head of Public Service Joseph Kinyua as the first and second respondents respectively. 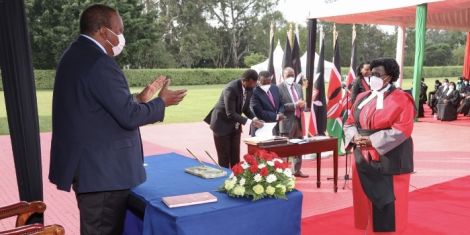 President Uhuru Kenyatta applauds a judge after she was sworn in at State House, Nairobi on Friday, June 4, 2021
PSCU

After hearing submissions from the parties, ruled that a number of entries in Executive Order Number One of 2020 were irregular.

However, the judge granted the cost of the petition to the Law Society of Kenya (LSK), the petitioner.

The development comes at a time where there has been a push and pull between the Head of the Executive after he refused to appoint six of the 40 judges recommended by the Judicial Service Commission (JSC).

According to the Law Society of Kenya (LSK) President Nelson Havi, this could be additional grounds for the impeachment of the president.

Former Chief Justices David Maraga and Willy Mutunga have recently called for the impeachment of President Kenyatta citing blatant disregard of the law. 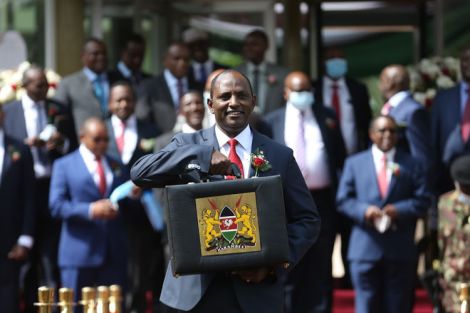 Maraga added that the Head of State was ruining the lives and careers of the six judges.

The executive and judiciary have had differences about funding with the former requesting more funding.

The judiciary will receive Ksh19.08 billion in the 2021-2022 budget set to be announced today, an increase of Ksh900 million from last year’s budget.