In a ruling delivered by Chief magistrate D.N. Ongoti via videolink on Friday, May 15, he pointed out that the prosecution of the cases was not being done professionally due to the failure of the DCI and the DPP to disclose evidence to the defence team as required by the law.

“It is apparent that parties are held at ransom after a plea has been taken. The parties and the court are taken in circles. It is heading to three months without due disclosures.

“Why can’t the DPP/investigating agencies disclose at the time of arrest just before plea? In any case, investigations are complete by then, aren’t they?” Ogoti posed. 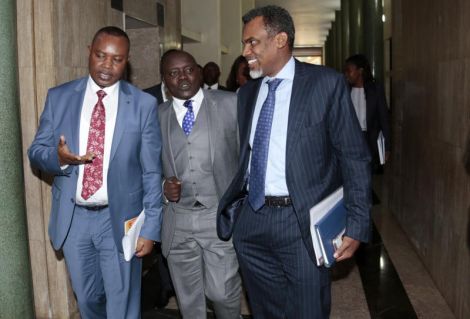 Director of Public Prosecution Noordin Haji (R) and Directorate of Criminal Investigations (DCI) boss George Kinoti after a Committee meeting with the Multi-Agency team on Corruption at Parliament on January 25, 2019

He stated that it was mandatory for the prosecution to provide the defence team with all materials, including statements of witnesses, criminal records where relevant, and expert evidence, including forensic and medical evidence (disclosing).

Also to be provided, where relevant, are transcripts of interviews, video, audio recordings, photographs, telephone calls and listening device intercepts, and other material in relation to the case, whether relevant or irrelevant.

“Under common law, Kenyan law, our constitution, rules and regulations and also case law, the prosecutors are required to serve upon the defence all material in their possession that is relevant in determining the guilt or innocence of the accused.

“The prosecution should not view disclosure as common courtesy but rather a legal requirement, and that the correct position is that they should encourage themselves and shift in the culture of viewing disclosure as a core justice duty.

“Justice is not for the prosecutor or defence counsel or the judicial officer but for the victim, the accused and the public at large and that is why the courts should ensure a fair trial,” Ogoti stated.

He further told the concerned agencies that the disclosure law, rules and regulations were meant to contribute to the fair administration of criminal justice by minimizing the effect of surprise at the trials, and also by contributing to the accurate determination of guilt or innocence.

The Chief Magistrate also reminded the DCI and the DPP that the failure to disclose significant evidence to the defence in numerous cases has led to reversal and dismissal of cases.

The Chief magistrate directed that the DPP, DCI, the EACC and Inspector General of police take notice of his ruling in any forthcoming cases set to be prosecuted before the court.

Yes I Do! Never seen before photos of Papa Shirandula’s wedding