3 more patients succumbed to the virus adding to the national death toll for Covid-19.

Health CS Kagwe had failed to reveal the numbers of deaths and recoveries at the press briefing at Othaya Level 6 Hospital in Nyeri on Sunday, June 14.

Nairobi has a bulk of the new cases with 92 while Mombasa has 16, Kajiado, 15, Busia and Kiambu, four (4), cases each and Kilifi, Nakuru, Nyamira, Uasin Gishu, Siaya and Muranga,have one (1) case each.

Nyeri County maintained a total of 9 people who had tested positive for Covid-19, with three of them being healthcare workers.

Kagwe revealed that the 3 healthcare workers tested positive for Covid-19 at Othaya Hospital, having contracted it in the course of their duties.

He warned Kenyans not to forget the threat posed by non-communicable diseases (NCDs) such as cancers, most heart diseases and strokes.

Kagwe disclosed that a long-term plan had been formulated to deal with the rising burden of non-communicable diseases.

He noted that Nyeri was chosen as one of the pilot counties for the Universal Health Care (UHC) program due to the high rates of NCDs.

“Persons living with NCDs are more at risk of contracting the Coronavirus compared to those without,” he noted.

Kagwe was accompanied by several officials to assess the preparedness of the Othaya Level 6 Hospital which is managed by the Kenyatta National Hospital (KNH).

Kagwe appreciated the work of Kahiga in curbing the spread of the virus through various containment measures.

Kahiga revealed that the county was working to provide 300 new isolation beds within the county following consultations with the Health Ministry and President Uhuru Kenyatta.

Nyeri leaders also thanked Kagwe for his involvement in bringing the Othaya Hospital project to fruition, stating that it would greatly benefit residents from the county and beyond.

Chege, who chairs the Health Committee in the National Assembly, commended the partnership between the government and Nyeri County that allowed the Othaya Hospital to be managed by the national government.

She thanked development partners who had sought to assist authorities in combating the pandemic and called for closer collaboration between the national and county governments.

Chege also alluded to recent controversies as she called for the Ministry of Health to share clear protocols on the burial of patients during the Covid-19 period.

Mucheru thanked Kagwe for his work in spearheading the fight against Covid-19, referencing memes inspired by the Cabinet Secretary’s daily briefings.

Watch part of Kagwe’s speech below: 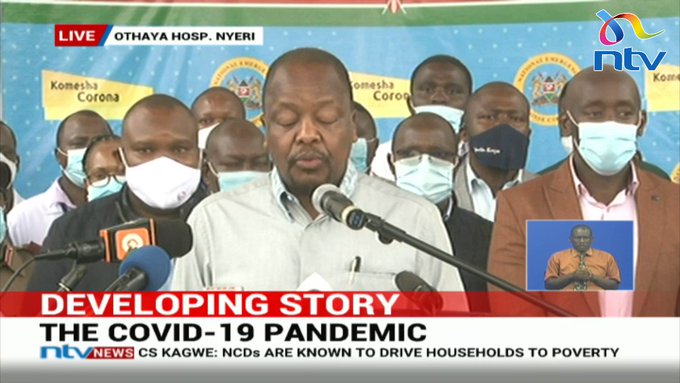 Ngunjiri Wambugu Reveals How Duale’s Fate Will Be Decided