During the daily Covid-19 briefing on Tuesday, July 28, Health CS Mutahi Kagwe stated that 4,888 samples were tested over the same period, bringing the total samples tested so far to 284, 500.

Of the 606 cases tested, 409 are male and 197 are female while the youngest case is a four-month-old infant and the oldest is aged 85 years. On nationality, 584 are Kenyans while 23 are foreigners.

Watch the press briefing below:

Nairobi recorded the highest cases with 448, as the Health CS cautioned that Embakasi had become a hotspot and warned Kenyans who were traveling in and out of the area. Kagwe, however, did not specify which Embakasi area.

“Embakasi has become a serious hotspot. If you’re leaving in Embakasi area, you need to know that Embakasi is a hotspot and further measures may have to be taken as regards the containment of some of the areas that the disease is growing way too fast,” Kagwe cautioned.

At the same time, 75 patients have been discharged from hospital bringing the total number of recovered cases to 7,908.

Regrettably, 14 patients have succumbed to the disease bring the total number of fatalities to 299.

Reiterating President Uhuru Kenyatta’s ban on the sale of alcoholic beverages in eateries and restaurants, Kagwe stated that the idea behind the ban was to reduce socialising among Kenyans.

“When we prohibit you from going to bars and ordering sausage and chupa mbili…that is normal. We hope you won’t resort to a plan B by taking parties to your homes or taking drinks to your hideouts,” he warned.

“I want to make it clear that this is a public health issue, this is not an enforcement issue so going forward, it is the public health officers who are going to go round and withdraw your licence and afterwards tell the police that the establishment does not have a licence,” Kagwe stated.

The CS asked Kenyans to treat their friends and kin as possible carriers in order to protect themselves from contracting the disease. 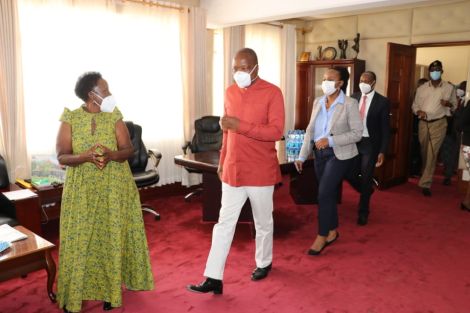 Some are rough and rude! Kate actress reveals the reasons for being a snob to her fans