While inspecting the construction of the National Sports Stadium estimated to cost Ksh350 Million, the CS stated that the facility is expected to be completed later in the year.

President Uhuru Kenyatta is expected to officially launch it in October 2020, after which the stadium will be ready for public use.

“The president will be here to officially open this stadium by October and any other stadium that will not be completed then we will have up to November to have the final works done so that we can have them opened to use too.

“By the end of this year, we want to have ten stadia completed so that we can be able to host international games. Sports is very important since it also brings to our country foreign exchange,” she stated. 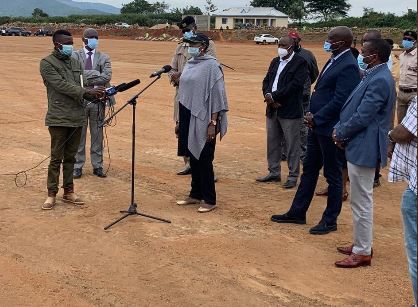 The stadium among was among 10 facilities Deputy President William Ruto is remembered for promising their completion within their first year of re-election in the run-up to the 2017 polls. The DP laid the foundation stone, however, construction was halted months after the election.

CS Amina stated that the construction had stalled due to a lack of resources. However, the situation had since changed and the contractor is given the go-ahead to complete the project.

On his part, Makueni Governor Kivutha Kibwana who had also accompanied the CS stated that the county professionals would assist in the construction if needed.

“These stadia will be a boost to our youths’ talents and that is what the president wants to the Kenyan youth,” Kibwana stated.

Among the facilities targetted for renovation include Nyayo Stadium which according to CS Amina is 95 percent complete.

“All the stalled facilities will be revived and that shows how the ministry is committed to ensuring what the government promised has been fulfilled,” she added.

“In a couple of months, Nyeri stadium will be done. In Kisumu and Mombasa we have a few challenges, but once sorted, the stadiums will be ready, so instead of five (we promised in 2013), we have gone for 11 just to make it better,” he pledged at at the time.