Skip to content
Politics News
July 8, 2020 tmz editor
CS Fred Matiang’i speaking at the launch of the negotiations of a Free Trade Agreement between Kenya and the United States of America on July 8, 2020.
Interior CS Fred Matiang’i together with his Trade counterpart Betty Maina on Wednesday, July 8, formally launched the Free Trade Agreement (FTA) talks between the US and the Republic of Kenya.

The pact was hailed as part of President Uhuru Kenyatta’s economic transformative agenda where US Ambassador to Kenya Kyle McCarter and the US Trade Representative Robert Lighthizer were also present.

“This Agreement will be the first between the USA and a Sub-Saharan Africa country, and will offer a unique opportunity to spur economic growth in Kenya,” Mataing’i stated.

He added that the negotiations process was estimated to be completed within the next 12 months. 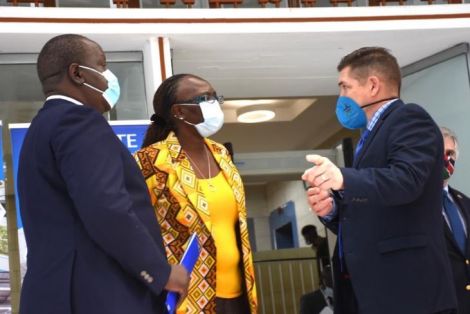 On her part, CS Maina assured that the project would not interfere with other agreements that Kenya was a party to.

“The proposed Free Trade Agreement talks between Kenya and the US will not undermine Kenya’s previous agreements with regional and continental trading blocks,” the Trade and Industry CS assured.

Earlier in June 2020, Uhuru stated that Kenya’s trade deal with the US would assist the continent by creating a reference upon which other African nations could negotiate bilateral arrangements within the African Continental Free Trade Area(AfCFTA) framework moving forward.

“Kenya will be the first under the new AfCTA so we are going to be trailblazers in this and we hope that others will also follow-through,” President Kenyatta stated.

The president explained that an FTA between the US and Kenya would reposition Kenya as a gateway of American investments into Africa. 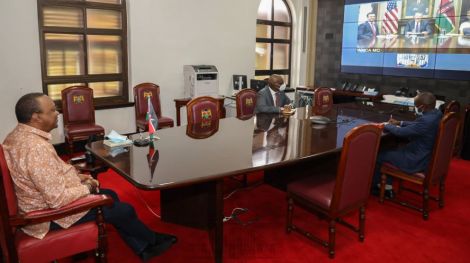 President Uhuru Kenyatta virtually following the launch of the negotiations of the FTA with the US on July 8, 2020.

“The essence of an FTA is an investment. Ultimately, I believe, Americans themselves will be able to say, why can’t we just invest in Kenya and not only take advantage of Kenya but the region,” the Head of State added.

In negotiating the FTA, Uhuru noted that Kenya was going for a win-win arrangement that would benefit both Kenya and the US.