Skip to content
News Politics TOP STORIES
June 18, 2020 tmz editor
Director of Criminal Investigations George Kinoti addresses the media on Thursday, March 5, 2020.
Director of Criminal Investigations George Kinoti has made a major reshuffle in his units. Kinoti transferred 90 detectives to various regions around the country with Nairobi County being the most affected.

The officers were directed to avail themselves at their new duty stations by Monday, June 22 according to a confidential letter quoted by the Daily Nation.

“Ensure proper handing and taking over is done and confirm their departures and arrival,” a letter dated June 12 reads. The letter was sent to DCI Academy Commandant, the Anti-Terror Police Unit and eight Regional Commanders.

The Homicide Unit which oversees murder investigations was most affected with eight officers transferred to various stations in Nairobi County.

The transferred detectives from the Homicide Unit were replaced by eleven other officers picked from a number of stations around the country.

Twenty Chief Inspectors were transferred to various regions across the country.

The shake-up at DCI comes six months after Kinoti adopted a resolution for radical changes in the department. On Monday, December 30, 2019, Kinoti disbanded the dreaded Flying Squad Unit.

He formed a new unit, the Squad Headquarters (SSH) which was tasked with enforcing the law in Nairobi areas prone to armed crimes.

The DCI also scaled down the Special Crime Prevention Unit (SCPU) and renamed it the Special Service Unit (SSU), which will be domiciled at the DCI headquarters in Nairobi. 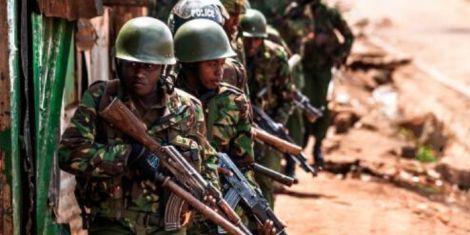 Kenyan policemen take position during an operation in the Nairobi slum, on October 28, 2017