Skip to content
Exclusives TOP STORIES
June 14, 2020June 14, 2020 tmz editor
The female officer helping out a mother during the enforcement of the dusk to dawn curfew on March 28, 2020.
Kimilili MP Didmus Barasa on Sunday, June 14, promised to lead Kenyans in rebelling against the curfew and other guidelines on Covid-19 if political meetings in the Western region were allowed to continue.

Barasa called for the arrest of Wamalwa and Oparanya, who were endorsed as spokesmen for the Western region at a meeting attended by over 40 MPs at Central Organization of Trade Unions (COTU) Secretary General Francis Atwoli‘s Kajiado home on Friday, May 29.

At a press conference, the MP argued that the government had no moral authority to order Kenyans to follow various guidelines if it could not rein in powerful individuals contravening them. 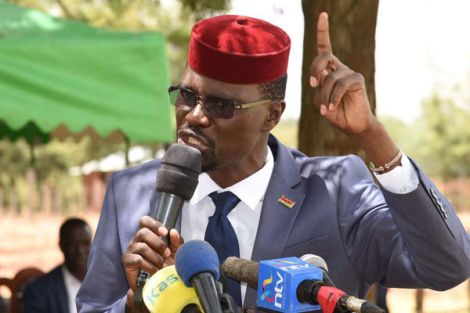 Kimilili MP Didmus Barasa during a fundraiser in aid of Kimoson Africa Inland Church in Kapsaret Constituency of Uasin Gishu County on March 3, 2019.

He promised to lead Kenyans in defying directives to close businesses, stating that he and his backers would call for bars to open late into the night.

Barasa questioned if Oparanya and Wamalwa were not subject to regulations banning gatherings of more than 15 people.

“If the President won’t stop these meetings in the Western region, then I want to tell him that after the 30 days he extended the curfew and cessation of movement elapse, we will lead Kenyans in defying these directives.

“We will continue with our businesses, and we will tell the bars to open even during the late night. And we are ready to fight for this from morning to evening,” he stated.

Barasa stated that he would not cave in to threats or intimidation because of his strong belief in what he was pushing for.

“Even if it means dying, we are not afraid to die. Because we understand that absolutely nothing comes for free. Even salvation which is given for free, it was paid for by Christ initially,” he stated.

Wamalwa and Oparanya had been meeting elders of various communities including the Bukusu, Sabaot and Teso as well as grassroots leaders.

They promised to champion the Building Bridges Initiative (BBI) in the region and use it as a path to bring different communities in the region together.

In addition, they pledged to use the Atwoli endorsement to lobby for the completion of stalled development projects in the region.

Listen to part of Barasa’s press conference below: