Kibicho, in an interview with The Standard on Wednesday, June 17, distanced himself from the claims, stating that he had no reason whatsoever to have Waiguru ousted.

“I have heard these allegations. People should stop deep-sea fishing. It is now a public thing and has generated public interest, even reported in the media. I want to face my accusers and settle this matter,” Kibicho stated.

The PS explained that he and Waiguru served the Jubilee Party and he had no reason to have her impeached.

“Waiguru is a Jubilee governor. I work for the Jubilee government. I can’t start fighting the system. I have no intention to do so whatsoever,” he indicated.

Kibicho stated that the Kirinyaga MCAs and the Senate had a mandate to work without external interference.

He added that he had not expressed any interest in vying for any political position.

“I also have the right to defend myself from baseless accusations and rumors. I come from Kirinyaga County but have never declared interest in politics and I have no intention to do so. I am a public servant. Why would I engage in local politics? To gain what?

“It’s two years to the polls. I should have started campaigning if I wanted to join politics. People must carry their own cross instead of dragging in my name,” he affirmed.

During Waiguru’s impeachment debate on Tuesday, June 16, Siaya Senator James Orengo insinuated that those responsible for her ouster were not members of the County Assembly.

“Waiguru’s ‘head’ is being asked for not by the County Assembly of Kirinyaga but by ‘other people,” he alleged.

The relationship between Waiguru and Kibicho has been rocky, with claims that the PS could be eyeing Waiguru’s job in 2022, a matter that he has refuted.

“Is PS Kibicho now superior to the President? If he wants to engage in village politics and insults, he should resign and join others in early campaigning,” Waiguru dared him in March 2020. 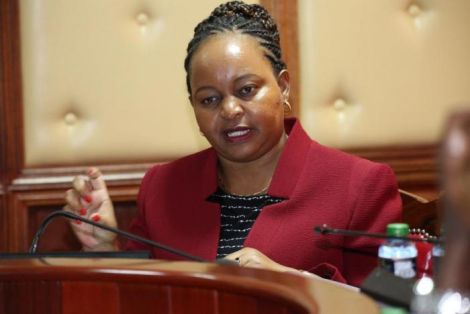 Kirinyaga Governor Anne Waiguru. She was impeached on June 9, 2020