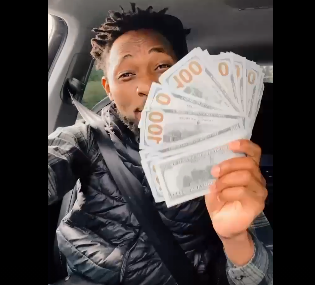 Former Churchill Show comedian David Kangogo who is known by the street moniker David The Student has proven that he is not struggling in the land of opportunities.

This comes after fans made light of the job he does in the USA. David is a Lyft driver.

The comedian took to social media to flaunt his success as a cab driver.

The trolls defined him as a ‘driver wa Uber’. Responding to this, David took to his Facebook page, and a short video of him showing off a wad of crisp USA dollar notes.

He was fanning his face with the money.

Sol Generation issues a statement over their signee Nviiri

A while back, David hit the headlines when a passenger he carried in his car refused to wear a mask and instead hurled racist slurs at him.

Watch the video below.

Unfortunately, with the raising cases we have to…’ Sauti Sol make major announcement

3 Young Girls Walk 11KM to Nairobi in Search of Wellwishers

B*tch Stole My Look! Bonang Vs Ama Qamata: Who Wore It Better?