Skip to content
News Politics
September 3, 2020 tmz editor
A file photo of KDF soldiers during a patrol in Kotile town on the Garissa-Lamu-Somalia border, as part of the Linda Boni operation aimed at flushing out Al-Shabaab terrorists.
A terrorist who took part in an attack that killed 147 Kenya Defence Forces (KDF) officers in El-Adde, Somalia surrendered to police officers in Mandera County on Tuesday, September 2.

Khalif Abdinoor Mohamed was part of an Al-Shabaab group comprising 300 militants who raided an AMISOM army base in Somali, in one of the deadliest attacks against peacekeeping forces in Somalia on January 15, 2020, at night.

Law enforcers in Mandera stated that Khalif surrendered an AK47 rifle and three magazines with 92 rounds of ammunition.

The suspect reportedly reached out to Burahale Station OCS who organized for his safe travel to Mandera County.

KDF soldiers pictured in Somalia in 2018

Khalif allegedly escaped from an Al-Shabaab camp on Sunday, August 30 before linking with the OCS.

Police are, however, keeping an eye on him and are investigating his motive to surrender before transporting him to Nairobi County for further grilling.

Officers added that the suspect was born in Bura, a village located at the Kenya Somali border. He is suspected to have participated in countless attacks against police and KDF.

The El-Adde battle saw Kenya heighten its war against terrorism. KDF retaliated through several attacks in Somalia and captured a number of enemy bases.

In Kenya President Uhuru Kenyatta launched a comprehensive strategy to deal with terror groups such as Al-Shabaab and radical extremism. The President empowered the police through allowances and provided sophisticated weapons to the KDF and law enforcers on Friday, January 17.

Following a successful investigation, Interior CS Fred Matiang’i ordered the freezing of accounts and property of nine individuals suspected to be the major financers. 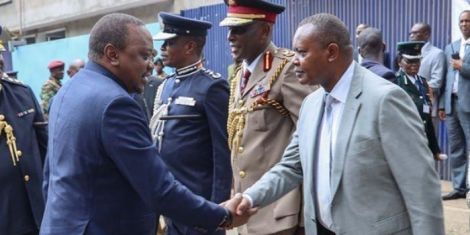