Skip to content
Politics Exclusives FEATURED News
May 27, 2020 tmz editor
Former Independent Electoral and Boundaries Commission CEO James Oswago arrives at the Ethics and Anti-Corruption Commission offices at Integrity Centre on February 26, 2016.
Former Independent Electoral and Boundaries Commission (IEBC) CEO James Oswago has been dealt a blow after a court ruled he has a case to answer over a scandal in the 2013 General Election.

The scandal involved the procurement of 30,000 Voter Identification Devices (VIDs) worth Ksh1.3 billion used in the 2013 elections. 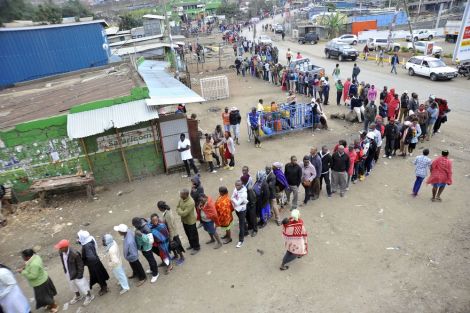 Voters line up along a street outside a polling station in Kiserian, Kenya on August 8, 2017.

The ruling for the case was initially scheduled for March 23, 2020, where the court was set to pronounce whether the persons involved had a case to answer.

The initial case against Oswago was adjourned back in June 2018 by Milimani Principal Magistrate Felix Kombo of the Anti-Corruption Court.

This was after former IEBC vice-chairperson Lilian Bokeeye Mahiri-Zaja and other prosecution witnesses completed their testimony.

Oswago had also been also named in ‘chickengate’ scandal as electoral and examination officials are alleged to have received more than Kshh50 million in bribes to award contracts to a UK printing firm.

Will Parents Pay School Fees Again? Here’s What you Need to Know