Skip to content
Exclusives Politics TOP STORIES
May 26, 2020 Judy Karanja
An image of a Landcruiser that is believed to have aided in the fake Ruto donations that left 12 hospitalised on Sunday, May 24.

CCTV footage and photos of a Toyota Landcruiser that was allegedly involved in the distribution of the fake DP William Ruto Foundation donations have emerged.

The video was shared on Monday evening, May 26, by Kikuyu MP Kimani Ichungw’ah, whose name was printed alongside Ruto’s foundation in the bags that were used to distribute the food aid, calling for investigations into the ownership of the vehicle.

“We call upon the DCI to get the owners of this car. We have CCTV coverage along its entire route,” he wrote on his Twitter page. 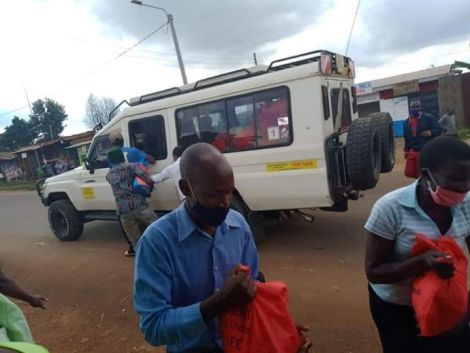 An image of a Landcruiser that is believed to have aided in the fake Ruto donations that left 12 hospitalized on Sunday, May 24.
TWITTER

In the CCTV footage, the vehicle is seen arriving at a market area where residents are seen surrounding it.

The vehicle spends about one minute and 12 seconds in the area before it starts moving again.

“With the Security CCTV Surveillance along the entire route used by these criminals, DCI and the Inspector General of police Hillary Mutyambai should apprehend them as soon as possible,” Ichungw’ah added.

A family affected by the donations had to seek medical attention after consuming what could have been contaminated sugar.

“Please be cautious as evil people who are distributing these may poison people for politics! A family that consumed the sugar, suspect it was poisonous as two of them have been treated after consuming it,” Ichungw’ah stated.

In a statement signed by David Mugonyi, the Secretary of Communication at the Office of the Deputy President, the William Ruto Foundation distanced itself from the donations.

The Foundation stated that it only delivered relief packages through formal and known networks such as churches, Mosques and with the participation of local leaders, to ensure track and trace mechanism.

“Reports from locals indicate that the strange food donations in question were hurriedly thrown from moving vehicles to unsuspecting public with fake branding, that is not from the Foundation,” the statement reads in part.

10 Ways To Bounce Back After Losing Your Job