Led by Isiolo Senator Fatuma Dullo, the special committee grilled the former AG over his role in the controversial deal, furnishing him with documents that bore his signature.

At one point, a question by Kitui Senator Enock Wambua caught Muigai off guard and all he could do was turn to his water bottle and take a huge gulp before proceeding.

“Somebody can show this to your face and say that you cleared the MES deal. What would be your defence?” Senator Wambua asked, leading to the water-sipping interlude.

The session got so heated that the former AG was seen battling with his protective facemask, which seemed determined to avoid his face.

For several seconds, Muigai tried his best to get it on with little success, going as far as just looking at it in bewilderment.

When he finally managed to get his act together, the former AG lay the blame of the controversial Ksh63 billion deal squarely on the Ministry of Health’s doorstep, which was then led by current Transport Cabinet Secretary James Macharia.

He went on to explain that his signature of approval on the contracts was given in good faith, and claimed to have advised the Health CS to negotiate the final contract.

Unsatisfied, Senator Wambua asked Muigai what exactly was meant to be negotiated yet he signed off on the deal and was present at State House during the publicised ‘signing of the deal’ ceremony.

The former AG maintained that he entered into the agreement in good faith that his client (Ministry of Health) would heed his advise to go back to the table to negotiate for the final contract, following the State House signing, which he said was purely ceremonial.

However, he made it clear that his advice was never heeded, resulting in the MES scandal that has rocked the health ministry.

He further stated that by the time he vacated office in 2018, the Health ministry was yet to deliver to his office the final contracts for sign-off.

In his defense, he also made the committee aware that his office’s role was to offer legal advise to its client, and not to superrvise Ministries and whether or not they followed his recommendations.

In February 2015, the Ministry of Health signed the MES deal with international companies for the supply, installation, maintenance, replacement and disposal of various equipment in at least two hospitals in every county at Ksh38 billion, a figure that was re-adjusted to the final Ksh63 billion.

Each county has been contributing Ksh200 million per year for the programme since the deal was signed in 2015. 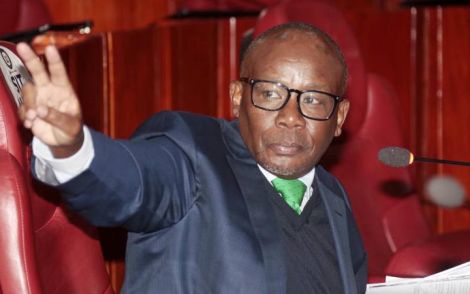 Former Attorney- General Prof. Githu Muigai when he appeared before the Senate Ad-Hoc Committee on the Medical Equipment Services at Parliament on Friday, February 21, 2020.

Have You Seen These Photos Of Anne Waiguru While In High School?