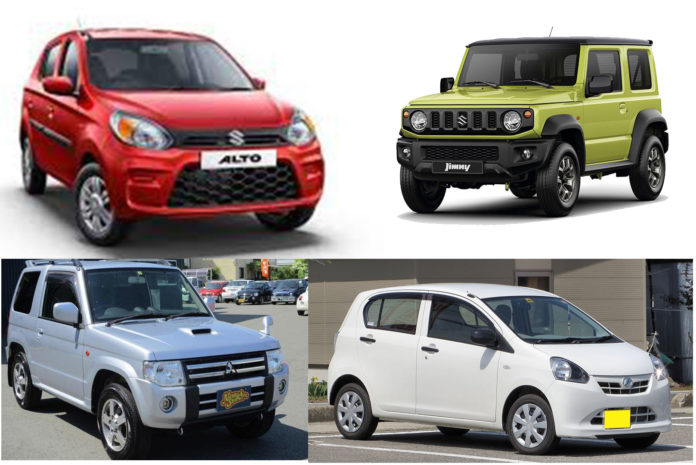 There is that small car in front of you in traffic, you probably have made fun of the small car by claiming that it could get stuck on chewing gum after you saw it struggle on a steep incline. You may have seen the continuous gag on memes and online that the small car doesn’t need to be taken to a car wash you just use your sink at home. If not then you must definitely heard of people calling some cars Dudu. The automotive technology that you are making fun of is called the Keijidosha or Kei car in short stands for light automobile, this is the smallest highway-legal passenger cars in Japanese vehicle category. Introduced in 1949 and regulations revised several times over the years increasing the size and engine size to improve on safety and power output of the vehicles. The regulation specify a maximum vehicle size, engine capacity and power output.
They are limited to below 700cc and a maximum output of 63 horse power.
The cars are made by just a few Japanese manufacturers with Daihatsu, Honda, Mitsubishi and Suzuki being the only mass production manufacturers. The other car manufacturers either rebadge or badge engineer from these manufacturers, for example Mazda and Nissan sells rebadged Suzuki models, whereas Daihatsu models are Badge engineered by Toyota and Subaru. In Kenya we have several models in the market that fall in this category, here are four of the most popular Kei cars in Kenya.

Suzuki Alto
This is the most popular and very common under 1000cc car in Kenya thanks to online taxi
business. The vehicle is also sold as the Nissan Pino and Mazda Carol. The vehicle has been
produced from 1979 in eight generations and with the sixth and seventh generations starting from 2004 and 2009 respectively being the most popular in the Kenyan market. The sixth generation comes with a 658cc engine inline three cylinder engine coupled with either a 5 speed manual or a four speed automatic transmission. The seventh generation came with some technological advancements with introduction of the Alto Eco which is fitted with an idling stop function that can enable the vehicle to do 30kms per litre of petrol. There were also other variants of the car including a 998cc variant. The vehicle has not only seen success as an online taxi but also a mean of personal transportation. You can get a 2014 model for around 700,000 and a 2008 model for slightly below 300,000

Daihatsu Mira
This happens to be the most controversial Dudu in Kenya’s online Car forums after introduction of a Badge engineered Subaru Version the Subaru Pleo in the market. The Mira has been in production since 1980 with it being sold in different names including Daihatsu Cuore, Daihatsu charade, Daihatsu Domino and now the Badge engineered Subaru Pleo. The car is popular in the country due to its fuel efficiency doing between 22-27kms per litre of petrol. The styling is also a major factor in its success with it being more streamline with smooth flowing edges unlike the other competitors which are all boxy in shape. This has made the vehicle popular even outside the Taxi business. The vehicle comes with either a 658cc engine or a 996cc engine mated to a five speed manual or a three speed automatic CVT transmission. The vehicle features the iconic Daihatsu inline three cylinder engine. The price tag of the Mira is also affordable with a 2013 model going for slightly below 600k and a 2008 model for slightly above 200k.

Mitsubishi Pajero Mini
Mitsubishi produced this car from December 1994 to June 2012 and it was modelled and styled as a miniature version of the Pajero SUV. It features a 660cc four cylinder engine that comes either as Natural Aspirated or with a Turbo. It was also produced in different limited editions including the re badged Nissan Kix. The Small SUV is popular due to the all-wheel drive transmission making it a cable vehicle off roader. The vehicle’s price are expected to go up since from 2021 there will be no more importation of the vehicle due to the eight year rule in Kenya. A 2012 model is currently going for 770k and a 2006 model going for slightly below 600k

Suzuki Jimny
It is also referred to as the Suzuki Jimny Sierra, Suzuki Samurai, or the Maruti Gypsy. It’ the most common Mini SUV in Kenya, it has been in production since 1970 for four generations.
The vehicle became popular in the late 1980’s and early 1980’s as it was mostly used by
Agriculture Extension Officers. The vehicles 650cc engine and four wheel drive made it a force to reckon with. It was fuel efficient and could access even the most remote areas. The body styling which came in a two door wagon, van, convertible, pick up or a five door wagon made the vehicle more popular because of its versatility. With the introduction of the 2018 model which is referred to as a miniature Mercedes G-Wagen around the globe, the car has gained a new hype in the younger generation and this has boosted sales of the vehicle, in Kenya you have to join the waiting list if you order a new one from Toyota Kenya who are the dealers of the vehicle. The Jimny also has engine variants above 1000cc but the body styling remains the same.
To get a brand new Jimny from the Toyota Kenya showroom you need 3.2million but you can still get a used imported 2013 model for 900,000 and a 1994 model for around 200k
We have limited vehicle models below 1000cc that are directly imported to Kenya due to
demand but there exists a lot of exciting vehicles that are below 1000cc that could be used
commercially, for leisure or just as daily commuter vehicles. And as we get more and more
young car owners with limited budgets, expect to see more and more of this vehicles on our roads.

‘He has a girlfriend,’ Zari defends son after coming out of the closet