Skip to content
Exclusives FACTS FEATURED
August 12, 2020 tmz editor
Nyeri Referral Hospital Head Mortician Eva Ngima
When Eva Ngima was young, she aspired to become a journalist. Her passion for the press however shifted over time as she now works at the last ward of Nyeri County Referral Hospital where she restores honor to the dead and says she would never trade the job for another.

Her dreams of being a journalist were dimmed when she failed to raise school fees to proceed to the university after finishing KCSE and instead looked for a job as a cleaner at the hospital.

Ngima prides herself on being the lead in a male-dominated career at one of the busiest and largest hospital facilities in the entire Mt. Kenya region. 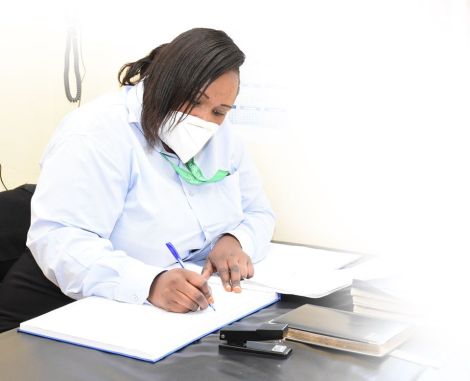 Her fierce compassion for the departed’s dignity began after the demise of her mother who passed on from breast cancer.

“I would go to view my mother’s body in this mortuary, and I did not like the way they were handling bodies. That is when I decided I wanted to work here and make it clean,” she stated during an interview with a local station.

She holds a deep desire to give the dead the honour and respect they deserve, while demystifying the long-held stereotypes associated with her career.

Nevertheless, her job was not easy to come by as she was often turned down by the mere fact that she is a woman.

“I had tried to get jobs in different hospital morgues but it was always hard. I did not lose hope easily and finally got called for a position with the County Government of Nyeri where I have been working since 2014 and have never looked back,” she remembered.

“I have faced several challenges including juggling between work and motherly duties. I also find it a grueling feat handling corpses of children of the same age as my two children which constantly reminds of my own,” added Eva.

Joseph Maina, a fellow colleague to Eva, commended the good work she has been doing, noting that she is a model leader. “Morgues have been formerly classified as dirty and smelly places, but Eva has given the place a female’s touch by ensuring a high level of cleanliness is observed,” he lauded.

What does a normal day look like for you?

I report to work by 7.00 am and check on bills and documents such as burial permits and death certificates. Upon receipt of a corpse I label it with a tag containing the deceased’s three names, the village in which he or she was born, and the date of admission.

The body is routinely undressed, cleaned, and embalmed before being preserved in the refrigerated storage unit until the family and relatives of the deceased come to take it. I also take part in postmortem exercises.

Tell us about the process of embalming a corpse. What kind of bodies do you receive?

Modern embalming involves treating human remains with chemicals to prevent decomposition, which leaves bodies suitable for public display during viewings and funerals. The cleaning of the rooms then starts after each care process of the bodies is done to ensure it is presentable and clean.

We receive all sorts of corpses and on a few occasions, families have picked up the wrong body for burial prompting exhumation and subsequent return to the mortuary. In most cases, the mix up occurs in suicide cases as it becomes relatively difficult for the next of kin to correctly identify their loved one.

Tell us about your experience/ most memorable time at your workplace?

I have been a morgue attendant for six years and top of my achievements is mastering the art of counseling to the bereaved. The most memorable case was during my first day, where I worked on a body of a six-year-old that had been severely disfigured in a grisly road accident.

It was extremely disturbing for me, but over the next few weeks I adjusted to interacting with the dead.

Has the County Government of Nyeri improved the working conditions?

Under the leadership of Governor Mutahi Kahiga, the mortuary has had a number of facelifts including repainting, floor repairing, roofing and setting up of a waiting bay for families picking the bodies of their loved ones. In addition, the road leading to the mortuary has been tarmacked and cabros fixed which has eased movement.

Further, the county government has installed modern coolers with a capacity of 15 bodies. I have also been sponsored to a six-month certificate course at the University of Nairobi Chiromo campus, which significantly improved my skills. 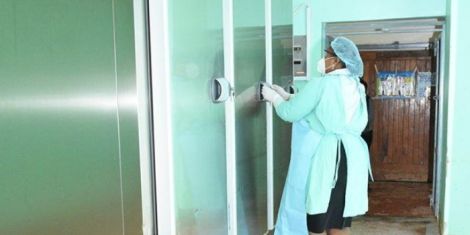 Fake it till you make it! Diamond leased a BMW for Esma as wedding gift