“Prospective developers or investors and the general public are informed that Nairobi Metropolitan Services will not be liable for any of planning permits dated March 18, 2020, to date, which has not been processed within the above framework,” he stated.

“For the avoidance of any doubt, all planning/development complaints, applications or hoarding, occupation, renovation permits and hard copy prints of approved drawings are to be submitted to the second floor, Amphitheatre Wing of Kenyatta International Convention Centre[KICC],” he added. 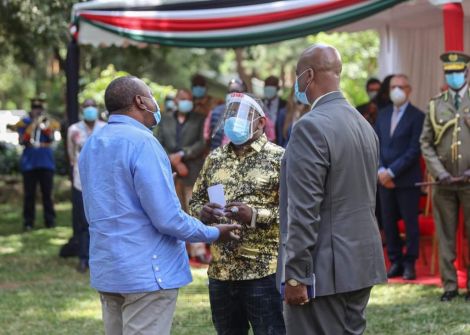 He further revealed that he had established a new urban planning technical committee to handle building plan approvals afresh, after disbanding both City Hall’s pre-technical committee and the Urban Panning Technical Committee in May 2020.

The two committees were accused of being run by cartels and engaging in corruption leading to delays in development approvals.

DG Badi had initially cancelled out all applications processed through the e-construction development management system by City Hall from March 18, 2020.

In a public notice issued on Monday, July 6, DG Badi said that the new multi-sectoral urban planning committee would handle all planning approvals and that his office would deal with the planning tasks.

The DG also disclosed that the NMS had cleared a backlog of 4,400 pending development plans since he took charge.

Badi, who is deputised by Enosh Momanyi, took up the newly-created role under President Uhuru Kenyatta’s directive on March 18, with the President handing him the keys to running the capital city’s core functions.

President Uhuru made it clear that his decision to delegate the crucial task to the DG was so as to bring an end to the corruption and dismantle the cartels that had birthed growth in the county.

Speaking during the official hand-over of key Nairobi City County functions to the National Government at State House, Nairobi, the President further described his decision as a breakthrough that would ensure Nairobi residents received services efficiently.

The transferred services include Health, Transport, Planning and Development, and Public Works.

La Liga, Premier League, Serie A Return: How to Watch it Live in Kenya