Speaking to TMZ.co.ke, Etale, who had gone to visit a friend in Kinoo, Kiambu County, disclosed that his vehicle had been broken into by unknown individuals.

The ODM communications boss indicated that the break-in had been carefully orchestrated as his vehicle’s alarm did not go off.

“I had left my laptop, two phones, a wallet, my medical covers, ATM cards and all of them were stolen. I feel so bad,” he disclosed.

Etale has since reported the matter to the Kinoo police station and investigations have been launched.

According to section 322 of the penal code, a person who handles stolen goods is guilty of a felony and is liable to imprisonment with hard labour, hence, the culprits could face a term not exceeding fourteen years if caught.

There has been a surge in reported cases of theft especially in Nairobi and its environs, with some suspects caught in the act by CCTV cameras.

The nine were arrested in the morning by DCI detectives at Furaha Apartments in Nyali.

“On searching the house, several rolls of bhang, a shisha pot, a packet of shisha, Ksh.100,000 in one thousand denominations and assorted mobile phones were found,” read the statement in part. 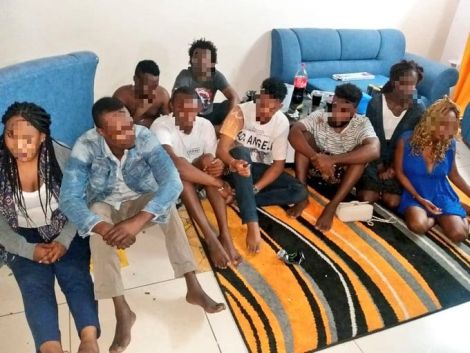 Shamba boy to selling changaa : Hustles of celeb before fame