The Senate County Public Accounts and Investment Committee discovered misrepresentation of fact in which some Ksh 1.3 billion was missing in the report that was presented by Governor Mutua.

The Senators led by Kisii’s Sam Ongeri wondered why the amount of money was not captured in the Integrated Financial Management System (IFMS). To his defence, Mutua argued that the missing funds were as a result of a discrepancy between the financial statement and the IFMS.

Mutua added that payments to IFMS are recorded after the system has transmitted transactions to Internet Banking and that the financial statement capture records of actual payments.

“It is worth noting that the audited financial statements were prepared based on actual payments made through CBK as at June 30, 2018,” Mutua clarified.

He was also taken to task to explain how his county paid Ksh 13.3 million to Football Kenya Federation (FKF) for the Cecafa Football tournament held in Machakos in 2017.

An audit report detailed that the Machakos Ministry of Tourism did not issue such a budget and the payment was never approved.

The report put Mutua on the spotlight as it indicated that the money was paid after the games had been concluded and FKF under its President Nick Mwendwa did not issue an acknowledgement receipt.

“These funds were paid to support FKF in hosting the tournament and promoting sports and tourism in Machakos,” that’s all Mutua stated in his defence. 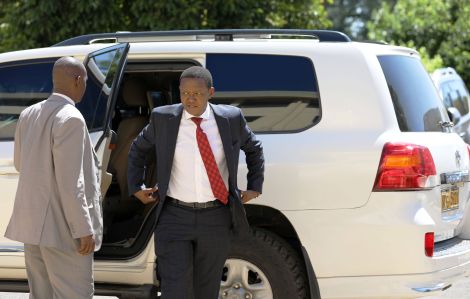 Machakos Governor Alfred Mutua pictured arriving at the Kenya School of Government (KSG) for a devolution meeting on February 20, 2020

List Of Politicians With Graft Cases But Cleansed By BBI