The Governor was speaking on Tuesday, June 16 at an event where the county recruited 97 health workers to bolster the war against Covid-19.

“I like telling people the truth. My first son was delivered in a public hospital and the doctor was a very good doctor. The experience my wife gave me about the place, what nurses tell them, made me pitty the rest going there. 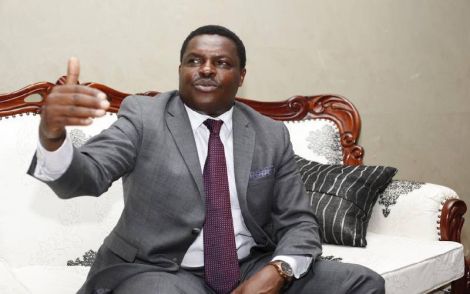 Tharaka Nithi Governor Njuki speaking in a past interview.

The Governor added that it is a backward practice of asking expectant mothers terrible questions when they are going through labour pains.

He noted the case was just an experience of the maternity department and warned that will not tolerate such cases in hospitals.

A number of women around the country have raised complains about the poor services they receive from nurses at maternity hospitals.

Njuki, however, commended the improved health care services in the county and opened up on the positive experiences from the county.

“I have people who tell me that they took their children to the hospital after chopping their fingers while cutting fodder and commend the speedy services,” noted the Governor.

This comes after a number of expectant mothers have shunned away from hospitals during the Covid-19 pandemic for fear of contracting the virus.

Even more shocking was that only five out of 10 children under one year were fully immunised, and only six women out of 10 went for their fourth antenatal care in hospitals in the month.

Covid-19: Nairobi jobless youth to get Sh616 per day for a month

10 Ways To Recover From An Unsuccessful Job Interview