Speaking during a tour of the forest, Environment Cabinet Secretary Keriako Tobiko disclosed that the people who live in some 10 estates in Lang’ata would not be forcefully driven out.

He explained that, if any resident failed to leave within the stipulated time, the government would begin fencing off the area connecting the Nairobi National Park with Ngong Forest and release wild animals to roam free. 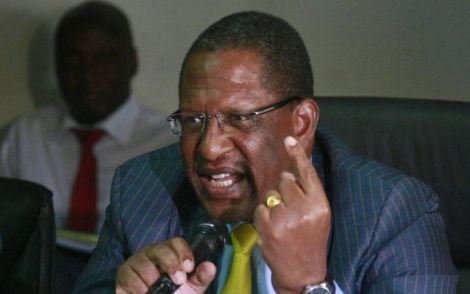 “We are not going to bother with anyone. We will proceed immediately to start fencing and we will fence you in. After we have done that, we will release the animals,” he stated.

“The directives that we have from the president were forthwith, immediately starting today, to move and reclaim all areas of this forest other than the areas that were lawfully excised for a public purpose,” he continued.

“On Tuesday, KFS officers, who were armed, arrived in two pickup trucks and drove around the estate. While leaving, they told our security officers at the gate that the land belongs to the government,” one of the residents told The Standard on June 23, Indicating Tobiko was making his threats true.

Some of the residents, however, welcomed the move and promised to work with the state to boost the country’s forest cover.

Concerned with the pleas, Nairobi Senator Johnson Sakaja demanded a statement from the Standing Committee on Land and Natural Resources over how the state would handle the affected Kenyans.

“The CS is on record threatening these residents and making such pronouncements that he is going to release animals into those estates. The committee should address the fear that KFS will fence off these estates in spite of a gazette notice of 1998,” he stated.

Earlier on March 7, 2020, the government launched an ambitious project aimed at increasing the country’s forest cover from 7% to 15% by the year 2022.

For the country to achieve the United Nations recommended 10% forest cover, the Environment CS stated that about a million trees needed to be planted annually in each of the 47 counties nationwide.

Is Self-Quarantine Failing in Kenya? [VIDEO]