Skip to content
News Politics
June 26, 2020 tmz editor
Grace Wakhungu and Sirisia MP John Waluke during their sentencing for fraud on June 25, 2020 at the Milimani law courts
When Sirisia MP John Waluke and his co-accused Grace Wakhungu were on Thursday, June 25, condemned to pay a fine of about Sh2 billion or serve 39 years in prison, not so much was known about mother of former Cabinet Secretary Judy Wakhungu.

A ruling that shocked the whole country as it is one of the severest punishments slapped on corruption offenders, left the two convicts exposed to public scrutiny like never before.

Their distress began in August 2004 when Erad Supplies and General Contractors Ltd was awarded an Sh778 million tender to supply 40,000 tonnes of maize. 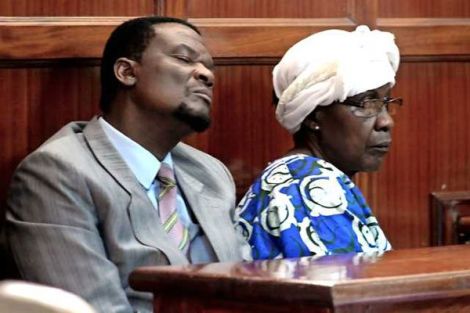 The two were co-directors in the company and the late Jacob Juma was the Managing Director.

Erad was to be paid Sh19,465 per tonne and in the return, the company would provide a performance bond of 10 per cent of the quantity.

This was not to be.

The firm did not deliver the maize despite being paid at least Ksh 300 million.

But how did the two meet or even get to know each other?

The beginning of Grace and Waluke’s relationship

Waluke, a village man in Yabeko, Bungoma County, was offered a job by Matthew Wakhungu, a medic who wanted his wife Grace to be chauffeured whenever she needed to go somewhere.

At the time, Grace was a General manager at Kenya Reinsurance and later Consolidated Bank.

The two would get accustomed to each other, bearing in mind that the job needed Waluke to be available every time Grace required to be chauffeured.

Grace is the 12th born child in a family of 16 individuals scaling the heights in their respective careers.

She is former Vice President Moody Awori’s sister and a child to the late Canon Jeremiah Awori and Mariamu.

Remarkably, Grace is brought up in a Christian family.

She is a mother to five children including Judy Wakhungu, the former Environment Cabinet Secretary and now Kenya’s ambassador to France.

Grace studied business and finance at Hendon College of Technology in London.