Speaking during the daily Covid-19 briefing at Afya House, Aman stated that 2,118 samples had been tested during the period bringing the total samples tested in the country to more than 124,474.

He further revealed that of the new cases, 129 were male and 55 female. All of them are Kenyan except one. 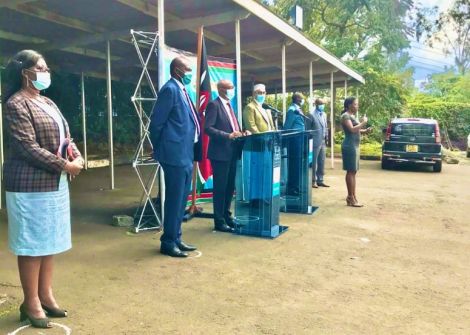 Health CAS Rashid Aman (at the podium) and his team addressing the media at a press briefing. May 18, 2020.

27 Covid-19 patients were discharged over the same period after recovering from the deadly virus, bringing the total number of recovered patients to 1353.

In Mombasa, nine cases came from Mvita with Changamwe recording 4, Likoni, 2, Nyali, 2, Jomvu and Kisauni one each.

Kajiado Counties cases were distributed in Kajiado central, 12, Kajiado East and Kajiado North 1 having one each while Meru had 13 cases from Imenti North.

In Kiambu, 9 cases from Lari, three from Juja, Kabete, 2, as Kikuyu, Kiambu Town and Limuru 1 each and in Busia, all 6 cases were truck drivers Malaba.

In Nakuru, Naivasha had 3 and Nakuru East 1 while the three from Machakos originated from Athi river and in Kwale, 1 case came from Lungalunga

He disclosed that the cases seem to have taken an upward trajectory with diagnosis kits purporting to test the disease flooding the market. He warned the public to be wary of the tests terming them as RDTs which are incorrect.

“The only test that can confirm the positive test is the Real-Time PCR test which has been approved by the Ministry of Health,”  stated Aman.

He further disclosed that Nairobi Hospital, Kenyatta National Hospital and Aga Khan Hospital were among a handful of centers that have been approved to run the Covid-19 tests.

2 Businessmen Watch as Ksh5 Billion Property is Taken Away