Skip to content
FEATURED Exclusives Life Style
May 18, 2020 admin
Rapper Collins Majale (Centre) during a past interview with media personalities Shaffie Weru and Adelle Onyango
Popular rapper Collo, real name Collins Majale, revealed in an interview how he bounced back after facing debts worth millions of shillings, unemployment, alcoholism and a broken relationship with his family.

The rapper, one-third of the legendary group Kleptomaniax, revealed in an interview shared on May 1, that during his stint as a copywriter with a leading advertisement agency, he used to make around Ksh250,000 in monthly salary.

He disclosed that he would often pitch jingles to multiple clients, at least ten a month, earning him an extra Ksh700,000 every month.

Collo disclosed that at the time, he felt lost and was deeply immersed in alcoholism before his fortunes changed dramatically for the worst. 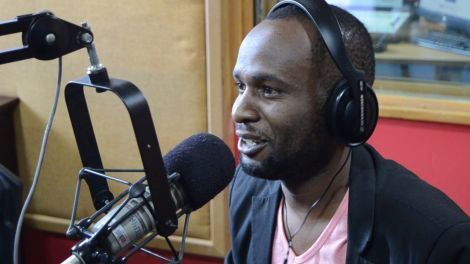 Rapper Collins Majale pictured during a past radio interview

“I was a copywriter getting Ksh250 every month. And then, I also believed that it didn’t hurt to present a jingle idea to any of the client services within whatever account at any agency, so I was a supplier.

“In a month I would write at least ten jingles for different brands and it would give me lets say, Ksh700,000 extra. Money was never the issue but I never saw that money because my spirituality wasn’t lit. That money ended up in creating more debts,” he stated.

He revealed that as when they undertook an advertisement campaign for one of their biggest clients, he got into an argument with one of his superiors, leading to him losing his job.

“There were people who were giving the client a raw deal at that time. I said something I shouldn’t have said, or rather I said it innocently and it offended one of the bosses,” Collo stated.

The Bazo Kizo hitmaker revealed that, by then, he owed a bank around Ksh3.5 million, and found himself dead broke and unable to provide for his young family.

His daughter, he disclosed, stayed home for three months for lack of school fees while the electricity to his home was disconnected for four months over failure to pay the utility bill.

Opening up, the rapper stated that he even contemplated travelling to the United States to live with his mother.

Auctioneers came and seized his assets after he failed to pay the debts, including a car and title deeds to plots he had purchased.

He disclosed that his wife prayed for him and asked him to accompany her to church, leading to his eventual salvation.

“I was a really disturbed person. And it was ugly, but I thank God because we are here to tell that story,” he stated.

Collo maintained that getting saved transformed him completely, noting that he realised many of those he considered friends in his past life could not be counted on.

He revealed that, at one point, he prayed to God to give him just one song as he wasn’t getting anything meaningful in his trips to the studio.

It was during this time that the rapper teamed up with a dance choreographer, Bruz Newton, and wrote Bazo Kizo which turned out to be one of the biggest hits of 2016.

Bazo Kizo, one of Collo’s first songs as a gospel artist, became the rapper’s biggest hits as a solo artist, having previously become a household name due to Kleptomaniax hits such as Tuendelee ama Tusiendelee.

The song also earned him an endorsement deal with one of the world’s biggest phone manufacturers as they marketed new products in Kenya.

Since then, he has released a number of singles in addition to pursuing other creative ventures.

Watch the interview below: