Skip to content
Politics News
June 24, 2020 tmz editor
ODM leader Raila Odinga at an interview in 2018
Orange Democratic Movement Party (ODM) are analysing how Raila Odinga can be pushed to run for Presidency in 2022. A number of strategists stated that the cold war between President Uhuru Kenyatta and his deputy William Ruto would be an opportune time for him to capitalise on his 2022 ambition.

Ruto is seemingly strategising on his 2022 ambition with analysts and his allies differing on whether he would break out of Jubile party or endorse another leader like Musalia Mudavadi after Kenyatta initiated a purge against him and ardent followers.

Odinga on the other hand has distanced himself from the 2022 succession battle and opted to remain silent on his prospects. In 2002, he endorsed former President Mwai Kibaki and then lost his 2007, 2013 and 2017 bids to be President. ODM’s Secretary-General Edwin Sifuna believed that he was fit to run for office as he had the capacity to lead Kenya to greater heights.

“To ask Odinga to endorse someone again is to ask too much. As the holder of the vision for a new Kenya, the country will do well to give him an opportunity to implement this vision,” ODM’s Secretary-General Edwin Sifuna stated while speaking with the Daily Nation. 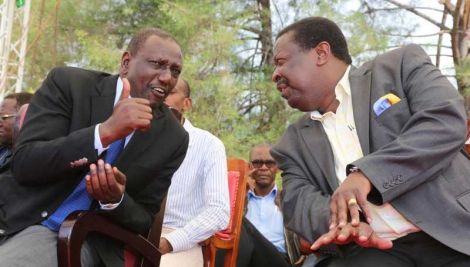 ODM Chairman John Mbadi added that Odinga was centered on leaving a legacy and wouldn’t be derailed by presidential ambitions.

“He has played a bigger role in the politics of this country so his legacy will be of great concern. Uhuru has been President for seven years and his concern is also about his legacy. His union with Odinga can bring forth something bigger for the country, including even sacrificing their ambitions. 2022 is still far and I believe the two will be on the same page,” Mbadi added.

Kenyatta and Odinga’s union is centered around the famous March 2018 handshake and Jubilee Secretary General Raphael Tuju stated that the focus of the two leaders should be on unity and cohesion. He hoped that the Building Bridges Initiative and the referendum would create an inclusive government.

With Kenyatta emphasising that he wouldn’t run for 2022, Ruto allies have been pressuring him to endorse the DP arguing that the Head of State had promised Ruto 10 more years after his tenure elapsed in 2022.

However, Senate Majority Chief Whip Irung’u Kang’ata clarified that Kenyatta had not yet endorsed anyone, not even Odinga.

“He is building institutions and not persons. He believes the constitutional amendments are key and once all that has been concluded, it won’t matter who is the next president,” Kang’ata added.

Former Kiambu Governor William Kabogo raised concern over the union between Kenyatta and Odinga, stating that constitutional changes were not paramount. Kabogo argued that Kenyan’s were facing a number of issues that needed to be addressed first before focusing on other ambitions.

“If I had been given a chance to speak at the BBI rallies, I would have openly told the two to listen and solve problems facing Kenyans. They should desist from pushing for constitutional changes.

“Raila is my friend and he should assist the President in running the country. But Kenyans having peace when he is in government means that he may be problematic,” he stated while speaking with comedian Jalang’o on Friday, June 19.

I Will Be Ousted – Tuju’s Deputy