Jubilee Party Vice Chairman David Murathe was on Friday, September 4, grilled by the EACC detectives at Madison House, Upper Hill over allegations leveled against him in the Kemsa scandal.

Murathe, who walked into the offices at 3:08 pm and walked out at around 6:15 pm, was called to explain his ties to Kilig Limited, a company that allegedly received Ksh4 billion to supply 450,000 personal protective types of equipment (PPEs).

The company was allegedly registered in January and had not received such tenders before.

Murathe linked the DP and his allies to the scandal, telling journalists that he had gone to present evidence to the detectives.

“I know Willbroad who is a partner at Kilig and a Mr. Zhu, and I know at some time, they were not able to secure financing for the provision of the kits that they had committed.

“They had a commitment letter from Kemsa, they transferred their shareholding to persons who are known associates of DP Ruto,” he stated.

On his Twitter page, Gachoka implicated the Jubilee Vice Chair, stating that he, Governor Kiraitu Murungi’s family and others, were culpable for the loss of billions in the unscrupulous dealings.

“Kenya: trust me when I tell you something and stand with me on this one, David Murathe is going down. I give the Country my word of honor. I will never let them (Murathe led) get away with Covidgate,” Gachoka wrote on his Twitter page.

Murathe, however, dismissed the allegations indicating that he would have sued if he wanted to but it was not worth the while.

Additionally, Murathe faulted the media for publicizing the matter so much that donors withdrew funds to the country. 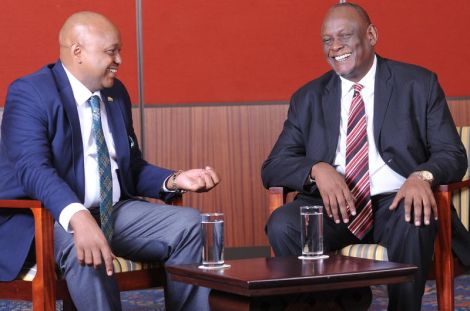 Ruto Reacts After Tuju Reprimands Him Via Phone Call [VIDEO]