Isaac Ruto and the DP are nemeses and the entry of the former into Jubilee piles up more woes on Ruto who is isolated from the government as Kenyatta is seemingly out to consolidate support from Rift Valley.

Speaking with Emoo FM, on Wednesday, May 28, Isaac Ruto, former Bomet Governor, went after the DP, blaming him for the tribulations he is undergoing after Kenyatta initiated a purge against the DP’s allies.

“The President asked them to stop campaigns but they ignored and that is why he branded them Tanga Tanga. As the head of the Executive, the President needs people who can help him push his agenda such as pass bills, support government policies and generally help him implement his manifesto.

“What DP’s allies such as Senator Kipchumba Murkomen (Elgeyo Marakwet) forgot is that he represents his party leader, who happens to be the President, in the Senate. The President cannot go to the Senate,” the former Chepalungu MP stated, explaining why Kenyatta ousted Murkomen as Senate Majority Leader.

He recalled how former Vice President George Saitoti was dumped by Mzee Daniel arap Moi, Kenya’s second President, who picked Kenyatta as his successor rather than Saitoti.

Isaac Ruto further alluded that Ruto’s fault was folding his own party United Republican Party (URP), to join Jubilee, a move which according to him, was disastrous.

“Nobody would be harassing his people because when you have your party, you have a voice,” he added.

On the looming merger between CCM and Jubilee, Isaac Ruto refuted reports that they had laid out a blueprint for the 2022 elections. He affirmed that the matter discussed bordered around unity and the handshake.

“We haven’t discussed the 2022 elections. We only discussed matters between now and the next two years, matters to do with the stability of the country and social-economic development,” he disclosed. 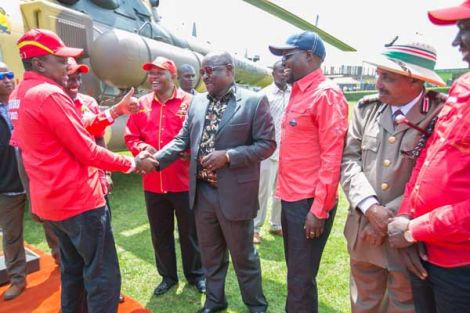