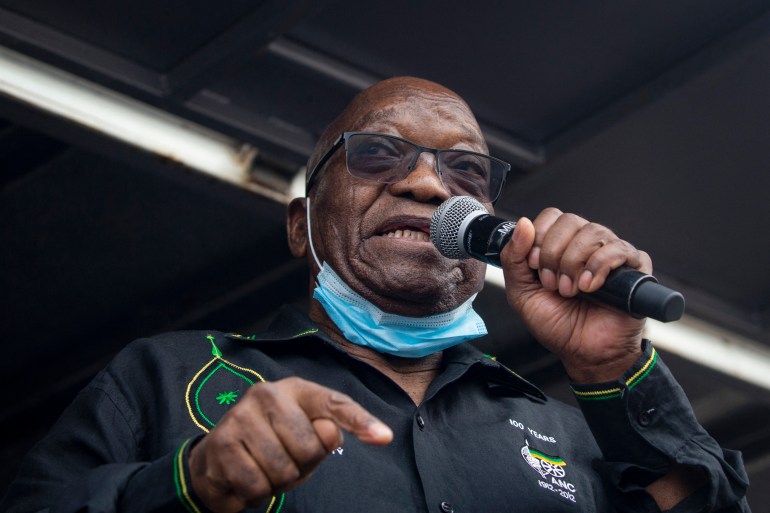 Former South African President Jacob Zuma has told hundreds of his supporters he is appealing a 15-month prison sentence and lashed out at the judges who issued the ruling, comparing them with the white minority apartheid rulers he once fought.

South Africa’s top court, the Constitutional Court, last week sentenced Zuma to prison for defying a court order that he should testify before a commission investigating allegations of rampant corruption when he was president from 2009 to 2018.

Several witnesses, including former Cabinet ministers and top executives of state-owned corporations, have testified of Zuma’s wrongdoing, including allowing his associates, the Gupta family, to influence his Cabinet appointments and lucrative state contracts.

A deadline for Zuma to turn himself in to authorities was set for midnight on Sunday (22:00 GMT). The court later agreed to hear his challenge to the 15-month sentence.

Zuma spoke at his home in Nkandla, in a rural part of KwaZulu-Natal province, where hundreds of his supporters, some of them armed, were gathered to prevent his arrest.

“The fact that I was lambasted with a punitive jail sentence without trial should engender shock in all those who believe in freedom and the rule of law,” Zuma told journalists.

“South Africa is fast sliding back to apartheid rule.”

Al Jazeera’s Fahmida Miller, reporting from Nkandla, said supporters cheered as the leader spoke, “especially as he remained defiant”.“Supporters said this is an attack on the former president because of what he stood up for and that he is being vilified.”

Miller added that the crowd of people “come and go,” but they will likely continue to show support outside his residency.

“[Zuma] has thanked the supporters for coming out, saying that he draws strength from their presence and without them … he would have been arrested, and with them here he is defended,” Miller added.

Zuma has launched several court actions to avoid imprisonment. On Friday, he filed an application with the Constitutional Court to rescind his sentence, which the court will hear on July 12.

“We have written to the Constitutional Court and applied that this sentence be rescinded or reduced, and we have now been given a date to go and state our case,” said Zuma.

On Tuesday Zuma will apply for an interdict to stop the police from arresting him, his foundation has announced. Zuma’s supporters say they want the sentence to be dropped completely.

Over the weekend, the ruling African National Congress sent representatives to speak with Zuma at his home.

The party could face a serious political crisis between those who back Zuma and others loyal to South Africa’s President Cyril Ramaphosa, who campaigned on a pledge to fight corruption.