Koinange, who is used to a busy day-to-day schedule, narrated that it had been a little tough to adjust to his current new normal.

“It is complete madness because the clock in my head still wakes up at 4 am. I’m walking around the house until 6 am when the show begins.

“I can’t go back to bed because my mind is programmed to radio and after that I start cooling down asking myself what I should do. I watch a lot of Netflix and take walks around the compund,” the JKLive show host narrated. 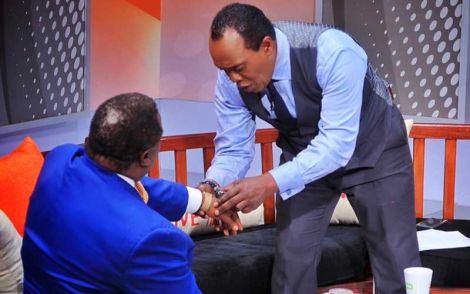 Despite losing his taste of food or drinks at certain times, Koinange stated that he had no other symptoms and was doing well.

“I really feel good, I’m asymptomatic according to the test which means that I am positive but showing no symptoms, I am okay,” he assured.

The renowned media personality encouraged Kenyans stating that more Covid-19 patients were surviving rather than dying.

He added that he had decided to go public with his Covid-19 status to demistify the subject surrounding the disease.

“Make no doubt about it, this thing (COVID-19) is real as CS Mutahi Kagwe always says, you can get it, I have got it. Don’t take this lightly, treat it seriously; this thing is no joke” he continued.

Koinange shared his Covid-19 status to the public on Monday, July 20, through his social media pages, saying that all his close contacts had been traced and were in self-isolation.

The Ministry of Health has since lauded media personalities and celebrities who have gone public with their results, disclosing that it would help in destigmatizing the disease.

“We need to encourage people coming out and state their case. It helps us to recognise that the disease can affect anyone and that if handled well, most of the people will recover from this disease,” CAS Aman pleaded.

‘When you’re having sex with a Tanzanian man use protection!’ Mpenzi Chokuu advises using Tanasha’s example

Kush Tracey talks about stigma after testing positive for COVID19