The award-winning journalist was hosted by RTV’s Fiona Mbabazi and the duo discussed an array of issues including; development of Rwanda’s capital Kigali, Koinange’s journalism journey and how he contracted the dreaded Covid-19.

To begin with, Koinange made an introduction of the day’s stories that were making headlines saying, “And in case you think you switched on to Citizen television, don’t panic. This is RTV, and yes, I am the guest anchor tonight.” 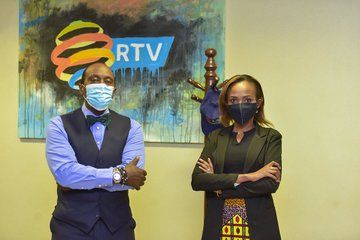 Smoothly, he signaled his co-anchor Mbabazi to continue reading the headlines and shortly after, the station’s stinger run and the duo began their interview.

The two exchanged pleasantries as Koinange gifted his counterpart a copy of his book, ‘Through my African Eyes.’

Koinange began the show by explaining how he got a job as a flight attendant with Pan Am (World Airways) when he was only 19 years old.

“After high school, I tried to apply for college but I couldn’t get a scholarship…So one day, I am working in Nairobi as an office messenger and I see this advert in the paper saying it was looking for flight attendants and I applied,” Jeff disclosed.

Koinange, who was among 40 individuals shortlisted for the job, wowed his employers when he made an announcement aboard a plane to Miami, Florida, and he got the job.

The celebrated anchor encouraged the youth to get into the industry, only if they were passionate about it.

“I always tell journalists about two things. one, your only as good as your last story. After the story, you are forgotten and two, journalism is a calling, don’t do it to be a superstar, only do it if you are passionate,” Koinange advised.

A section of social media users praised Koinange for acknowledging Kigali’s beauty and how far the Country had come in terms of development.

“His views on Kigali and Rwanda, in general, got me a bit emotional,” Edmund Kagire, a journalist in the country, stated.

“Its a click! give him my greetings if he’s still around in Kigali,” a fan commented.

Koinange is currently in the country for a virtual summit on the African Green Revolution Forum.