Speaking to the press, Joho disclosed that Odinga had already undergone the procedure and was in high spirits.

“This morning I have had the opportunity to speak to my party leader. I feel happy and encouraged that he is progressing really well.

“We continue to pray for our Baba and our leader and I have no doubt that within the shortest time possible, Baba will be back in Kenya,” Joho stated as he urged Kenyans to continue praying for him. 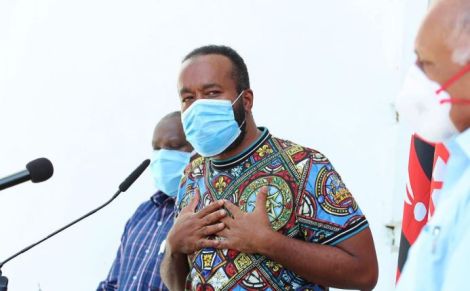 Mombasa Governor Hassan Joho during a press briefing on June 5, 2020.

Just like everyone, Joho reminded Kenyans that leaders get challenges that are beyond their control.

“Sometimes leaders get sick and they are treated. Sometimes they have to deal with issues that every human being goes through and the best we can do is pray for them,” he stated.

He then assured Kenyans that the former Prime Minister would soon be back in the country after making a full recovery.

Earlier in the week, there were speculations that the ODM leader had travelled to China for treatment of a type of cancer associated with old age.

Reports indicated that Odinga was in the company of his daughter Winnie Odinga and a male aide on Sunday, June 21.

However, on Wednesday, June 24,  the Odinga family Spokesperson Oburu Odinga stated that Raila was not in any serious health condition.

“Jakom is out of the country for a minor surgical operation on his back. It is not a serious health issue but just a minor one. So he is okay.

“The Germans have a good hospital facility in the Arabian country where he is being monitored,” stated Oburu.