Skip to content
News Politics
July 17, 2020 admin
President Uhuru Kenyatta and First Lady Margaret Kenyatta at State House for the 91st Annual St John Inspection Parade at State House in 2019
President Uhuru Kenyatta reiterated his stance, insisting that he will retire in 2022. His backyard, Central Kenya has for long been discussed with analysts and politicians arguing that there is no leader from the region capable of filling Kenyatta’s shoes.

However, former Kiambu Governor William Kabogo announced that Mt Kenya had already lined up President Uhuru Kenyatta’s successor as the head of state approaches the end of his second term in 2022.

Kabogo was one of the area politicians who attended a key meeting convened by National Assembly Speaker Justin Muturi at the PanAaric Hotel in Nairobi on July 8.

“People want to believe that we do not have a successor. We have it covered. I am saying ‘we’ because I am one of them. We are many leaders. The only difference is that we are not politicizing it because it is now time for President Uhuru to do his work. We are only strategizing.

“The meeting we had can actually produce a very able leader, someone who has been elected by the people and not selected in a boardroom,” Kabogo disclosed in a question and answer (Q&A) session with the Standard.

Kabogo added that another key issue discussed was the development agenda and sharing of revenue.

He went on to urge the President to focus on fighting corruption rather than completing his Big 4 Agenda as his tenure was elapsing. Kabogo argued that Kenyatta would leave Kenya a very rich country with proceeds of corruption from convicted suspects directed towards development.

“If I were Uhuru, I would do my things quietly and differently, not the way they are being done now. The president needs to worry about his legacy because this ranting and back and forth is not worth it,” he urged.

Nakuru Governor Lee Kinyanjui’s attendance of the meeting caused jitters in Rift Valley, with a section of politicians aligned with Deputy President William Ruto accusing him of orchestrating a plot to split Ruto’s support in the region.

“We recognise that we have a considerable population of communities from Central Kenya living in Nakuru, but we should appreciate that this remains the headquarters for Rift Valley, not just a county. The aftermath of their plans will not define the path we shall take in Uhuru’s succession,” Bahati MP Kimani Ngunjiri lamented. 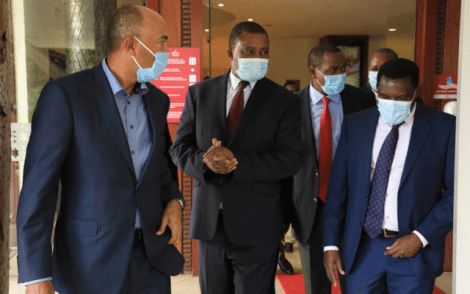