According to Abdullahi Abdi, Abdullahi Abdi, the nursing officer in charge of the Garissa referral hospital pediatric ward, the four died in just under two weeks as more patients kept flooding in from the neighbouring Kitui County.

“This is the highest number of patients we’ve gotten from Kitui. We used to admit 2 to 3 patients a month,” he stated.

He further revealed that of the 13 admitted, 11 were children all below the age of 10. Peter Muthengi, whose 5-year-old daughter is currently admitted at the Garissa health facility revealed that he was forced to rush to Garissa as no Hospital in Kitui was equipped to handle the tropical disease, instead referring them to neighboring counties.

“I have been to 3 hospitals. I was first referred to Isiolo hospital from Tseikuru but we were chased away from Isiolo at night over claims that there was an outbreak of Covid-19 in Kitui county. I went to Mwingi sub-county hospital but I was told they don’t treat Kal Azaar and referred again to Garissa,” Muthengi said.

“Back at home there are several children with the same problem but their parents cannot afford to bring them here for treatment. There is a looming problem in the two wards and I am appealing to the government to urgently send medics there to save lives,” he added.

Peris Joseph, another Kitui resident who had rushed her loved one to Garissa after noticing some of the disturbing symptoms, expressed her concern over the ill-equipped health facilities in Kitui County.

“I am urging the Kitui county government to buy drugs and send health workers to the affected wards to treat the sick before more lives are lost.

“It’s a shame for residents of Kitui to travel all the way to Garissa to receive treatment while the two counties receive similar health allocations from the national government,” she stated.

Kala Azar is the second-largest parasitic killer in the world – only Malaria is more deadly. Along with Chagas disease and sleeping sickness, kala-azar is one of the most dangerous neglected tropical diseases.

The parasite is spread to humans by bites from infected female sand flies. It attacks the immune system and is almost always fatal if not treated. There are between 200,000 and 400,000 new cases a year, about 90% of which are in India, Bangladesh, Nepal, Sudan and Brazil.

It is caused by bites from female phlebotomine sandflies – the vector (or transmitter) of the leishmania parasite.

The sand flies feed on animals and humans for blood, which they need for developing their eggs. If blood containing leishmania parasites is drawn from an animal or human, the next person to receive a bite will then become infected and develop leishmaniasis.

Months after this initial infection the disease can progress into a more severe form, called visceral leishmaniasis or, kala-azar.

Signs and symptoms include fever, weight loss, fatigue, anaemia, and substantial swelling of the liver and spleen. 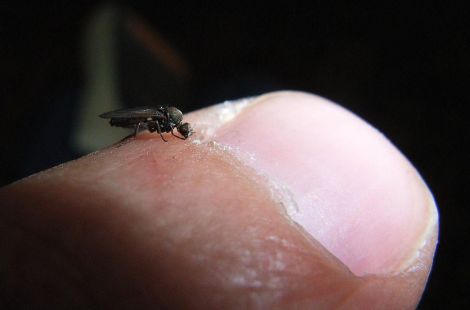 A sandfly biting on a finger. Sandflies are knownt to transmit the Kala-azar parasite

‘I’ll love you beyond the depths of the earth,’ Jacque Maribe’s message to son on his birthday

10 Tips To Break Into The Entertainment Industry