A false press statement dated Tuesday, May 26, circulated online revealing the contaminants of the food donations that were distributed on Sunday, May 24.

KEBS took to twitter to post the fake report with the caption, “The Kenya Bureau of Standards (KEBS) wishes to inform the public that the Press Statement on the Gikambura Kikuyu relief food incident is fake.”

Deputy President William Ruto (left) and Kikuyu MP Kimani Ichungwa during a past church service at PCEA Church in Mwiki on March 3, 2019

According to the statement, the maize flour contained aflatoxin substances, the samples also contained a pesticide, Dicamba, a chemical they say adversely affects female fertility.

“Samples were taken from the suspected donations in the aforementioned incident. Among the food, samples include the following: cooking fat, sugar, dry tea leaves and maize flour,” read the fake report in part.

It also noted that the samples were taken by Bio technicians from the Government Chemist and KEBS and added that the results were submitted to the relevant authorities including the Ministry of Health and the Directorate of Criminal Investigations.

The report went on to explain that KEBS is in the process of establishing whether the items in question passed the standardization tests on the normal process of goods in the Republic of Kenya as required by the law.

The donations which were distributed in Gikambura area at around 6 p.m on Sunday were branded with Kikuyu MP Kimani Ichung’wa name and William Ruto Foundation which belongs to Deputy President William Ruto.

Ichung’wa was first to distance himself from the donation and revealed that one family had to seek medical attention after consuming what could have been contaminated sugar.

Ruto followed suit and released a statement through his William Ruto Foundation noting that it only delivers relief packages through formal and known networks such as churches, Mosques, and with the participation of local leaders to ensure track and trace mechanism.

The incident came days after Deputy President William Ruto donated food through his William Ruto Foundation in partnership with Ichung’wa to over 600 vulnerable families in Nachu Ward, Kiambu County.

Kikuyu Deputy County Commissioner Charles Korir stated that the DCI was already looking into the matter while Kiambu Governor James Nyoro revealed the 12 residents who consumed the food were rushed to Tigoni, Kiambu and Thika Level 5 Hospitals. 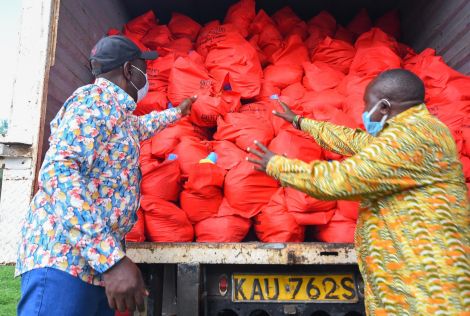 Things that make some Kenyan men fail miserably between the sheets

All about liver cirrhosis, the disease the late comedian Othuol battled