Skip to content
Sports News
July 23, 2020 tmz editor
Clarke Oduor celebrating after scoring in the 1-2 win over Brentford in the English Championship on Wednesday 22 July 2020.
Kenyan versetile footballer Clarke Oduor will be eched into the Barnsley FC history books as he scored a last minute goal in the 1-2 win over Brentford FC to ensure survival in the English Championship.

The goal saw Barnsley bag all three points against promotion hopefuls Brentford to survive the relegation drop by a whisker as only a single point separated them from Charlton Atheltic.

Odour had only lasted five minutes on the pitch before scoring the goal as he came on as an 86th minute sub for Marcel Ritzmaier. 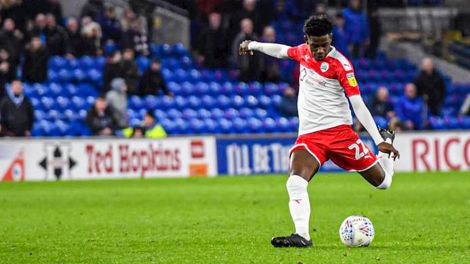 Barnsley left-back Clarke Oduor when he made his debut for the club away to Cardiff on December 7, 2019

This marked Odour’s first goal for Barnsley and opened his professional account after featuring 11 times for the Championship outfit in the 2019-2020 season.

Brentford were caught napping in the 91st minute as another substitute Patrick Schmidt hit a low ball across the face of goal to find Oduor who was unmarked to tap in a simple finish.

With the loss, Brentford failed to secure automatic promotion and will now have to fight in the Promotion Play-Offs where they face Swansea City.

Barnsley coach Gerhard Struber almost walked out of the post-match interview as he struggled to contain his emotions but later on heaped praise on Odour.

“Eight weeks ago, I told my boys that I needed every player in the squad and I think Callum and Clarkey scored the most important goals in this season. Every player showed me he is a team player.

“Clarkey had not played a lot and not had so much game time and had a hard time, but he was ready to take his chance and he was ready for his most important job,” he noted.

Oduor’s goal also went down in history as the last strike at Griffin Park in 116 years with Brentford planning to move to a new stadium ahead of next season.

The Kenyan has been converted into a left-back by Barnsley but primarily plays as an attacking midfielder.

He is yet to receive a Harambee Stars call up but at the age of 21, its only a matter of time before he plays for Kenya if he maintains his form. 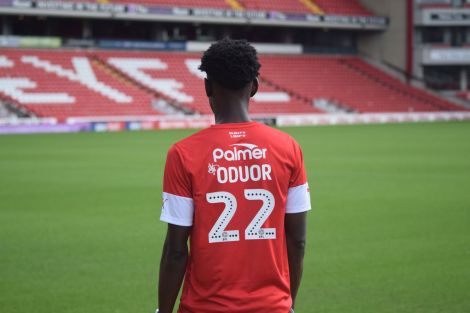 Barnsley left-back Clarke Oduor poses at the Oakwell Stadium in England after being unveiled on August 25, 2019