Speaking to Tmz.co.ke, Wachira revealed that he shared his personalized wedding vows with his bride at a colorful private ceremony held in Dallas, Texas on a date that holds a deeper underlying meaning to the newlyweds.

“We got married on Loving Day (on the anniversary) of the Supreme Court ruling,” he explained while referencing the day in 1967 when the US Supreme Court overturned the ban on interracial marriages.

Due to the ongoing global Covid-19 pandemic, the couple decided to broadcast the wedding to their loved ones via video link. 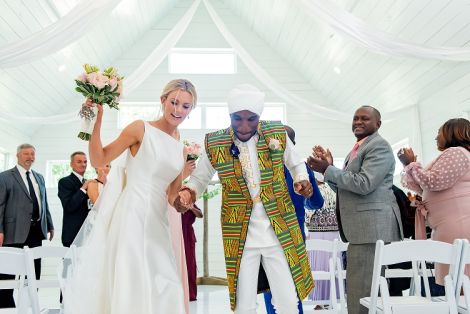 James Wachira and his bride Cecelie pictured during their wedding. June 12, 2020.

“Our wedding lasted a short and memorable 39 minutes. We decided to quell the uncertainty of Covid-19 with the certainty of our Love.

“We created a virtual presence for our loved ones, near and far away, that could not attend our wedding due to the Covid-19 pandemic. Love always wins!” an ecstatic Wachira disclosed.

The finance wizard, who enjoys conjuring up feasible solutions to global economic problems, was thrown out of his comfort zone when he first met his future bride, explaining that he had to master all the courage in the world just to chat her up.

“All you need is fifteen seconds of great courage and they can change your entire future,” he narrated, albeit coyly.

The two met in the Spring of 2018 in Washington, DC at a World Bank Youth to Youth event.

Speaking to Kenyans.co.ke, the new bride revealed that the venue where they first met, was the very same spot in which she had once met David Beckham. 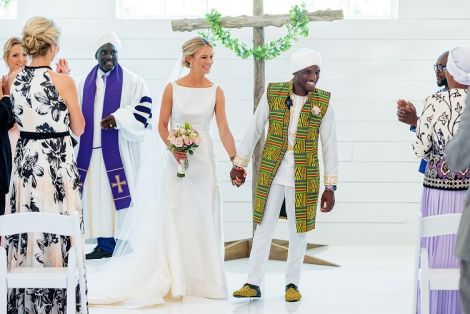 James Wachira and his bride Cecelie pictured during their wedding. June 12, 2020.

“I met my first crush there, David Beckham and then I met my husband, David Wachira, there,” she joked while recalling their first encounter.

She left a lasting impression and their fate was sealed from day one as Wachira explained.

“Several months later, I invited Cecilie to Kenya for her first visit; where we worked on two non-profit events, after which, we embarked on an unforgettable Safari. Sadly, once summer was over, I had to leave for a year-long assignment in Zimbabwe. Despite the insurmountable distance, we made it work,” he narrated.

As is custom, once the finance specialist decided that he wanted to spend the rest of his life with his close friend, there was the small task of approaching her father in pursuit of his blessings.

“I sought her father’s blessing for the proposal in July of 2019. I was nervous and did not know what to say. I opted for the simplest message. I told her father; I have grown to love and respect your daughter.

“I am seeking your family’s blessing in asking for Cecilie’s hand in marriage. He (Oscar Olaussen) was thrilled and glad. He gave me a big hug and said you have our blessing,” he disclosed. 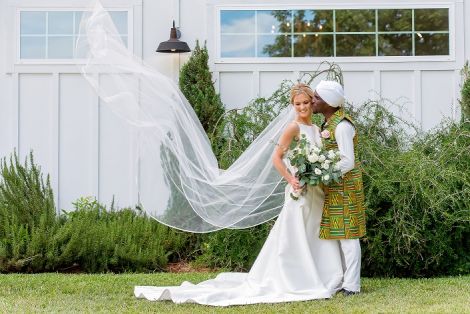 Five months later, on November 5, 2019, he popped the question and the rest, as they say, is history.

Cecilie was equally as nervous when it was her turn to meet her future in-laws, but they had already grown to love her as one of their own. Her exemplary skills in the art of making mukimo and other Kenyan delicacies endeared her to her new family even more.

“I don’t travel anywhere without my private stash of Kenyan tea! Sukuma’wiki (kale), mokimo and beef stew are meals that I make at least once a week. When we travel to Kenya, my first request is for us to go to Blue Springs Hotel, on Thika Road, for a good cup of chai,” she revealed.

With current global protests following the brutal killing of George Floyd on May 25, 2020, in Minneapolis, Minnesota at the hands of Derek Chauvin, a police officer, the newlyweds shared their outrage over the incident and urged people to turn to love.

“I’ve struggled with what to say in light of recent events. My biggest fear has often been that I would say the wrong thing at the wrong time. The fact that I even have an option to stay silent during a time like this, when the world around me is on fire and people of color are being murdered, highlights unearned white privilege,” Cecilie explained.

On his part, Wachira urged the world to break the silence and tackle the issue of racial discrimination head-on.

“We can grow into a society and humankind that is fair, just, and equal. But for that to happen we must also recognize that “the only thing necessary for the triumph of evil is for good people to do nothing,” he urged.

”So please, examine your own biases and consider where they may have originated. And I beseech you, end the silence,” Wachira reiterated.

With the current ban on international flights, Mr & Mrs. Wachira had to switch up their honeymoon plans, which involved a trip to Turkey, and settled on a  short-drive honeymoon gateway, in New England.

Watch footage from their intimate wedding below courtesy of 4500 visions: