Skip to content
Entertainment FACTS Life Style Radio & TV
July 30, 2020 tmz editor
Citizen TV anchor Jeff Koinange at RMS Studios in September 2019
Anchor Jeff Koinange made a comeback on Citizen TV on Wednesday, July 29, much to the surprise of his followers and audience.

Before the show began, Koinange made a small joke on how he felt working from home and tested his camera on Live TV.

“Is this camera on. Wait a minute. I have to make sure this interview happens from home. Please don’t panic, I am back. I tested for Covid-19 nine days ago and nine days later am still okay and standing strong,” Koinange stated.

A poster shared by Citizen TV anchor Jeff Koinange before making a comeback on Citizen TV on Wednesday, July 29

He further appreciated those who wished him well, prayed for him and stood by him in different ways after he announced his status.

Koinange made an appearance on his own show as a guest on Wednesday, July 22, where he announced that he was an asymptomatic patient. While still under isolation on July 29, he made it clear that he was back to work despite being ill.

However, he did not disclose on the progress of his isolation and whether he had undergone more tests to ensure he has tested negative.

During the show, Michael Joseph lauded the government’s decision to have KQ resume flights to boost the economy. Jerotich Sii who also tested positive for Covid-19 urged those who test positive to share their statuses to encourage others facing stigma.

Kenyans were full of praise for Koinange, lauding him for taking the step to return to work while still under isolation.

“To my brother Koinange, I am wearing a mask as I watch you on TV today. I am not taking any chances. However, you look good. Be well and be strong Jeff,” analyst Mutahi Ngunyi tweeted.

One Peter Kariuki stated that Jeff Koinange hosting a show while he is Coronavirus positive shows that individuals should not be stopped from running their daily activities by Covid-19.

Fellow anchor Waihiga Mwaura also worked from home on Tuesday, July 28. Responding to a comment from a viewer he explained, “with the pandemic, we were told work from home if you can and that is what we are trying to do here.” 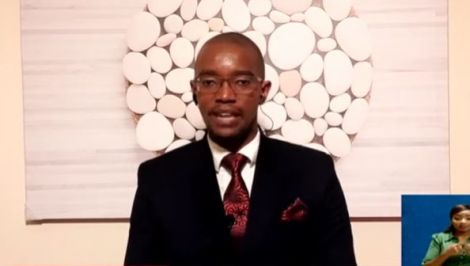 Dear men, Here is why you should marry an older woman

Mombasa Residents Up in Arms Over Govt Testing Plan