The poll, which he put online on May 12, was aimed at having Kenyans decide who between President Uhuru Kenyatta and Deputy President William Ruto was the first to betray the other.

The poll was occasioned by the Jubilee Party’s decision to oust Nakuru County Senator Susan Kihika and Elgeyo-Marakwet Kipchumba Murkomen from their positions in the Senate and hand it over to Senator Irungu Kang’ata (Majority Whip) and Senator Samuel Poghisio (Majority Leader) respectively.

The poll had an overwhelming 38,861 responses, with 40.9% of the voters deciding that President Kenyatta was indeed the first to betray DP Ruto. 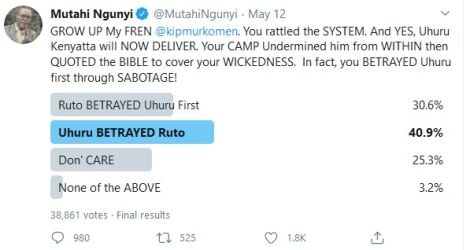 A screenshot of the Twitter poll my Mutahi Ngunyi put online on May 12, 2020.

30.6% of the respondents insisted that President Kenyatta had been betrayed by his deputy first while another 25.3% stated that they did not care and 3.2% did not agree with the statements.

Ngunyi has several times publicly questioned DP Ruto’s political motives and opined that the relationship between the president and his deputy was no longer tenable given what he described as the DP’s blatant defiance.

Through his YouTube channel, The Fifth Estate, where he hosts political discourses and his social media platforms, he has made clear several times his aversion to the DP’s modus operandi.

He has also been an avid supporter of President Kenyatta’s every move, a choice that has of late landed him in Murkomen’s bad books.

The Elgeyo Marakwet Senator and Digital Strategist Dennis Itumbi on April 21, accused him of scripting K24’s Punchline and inviting guests whose sole purpose was to denigrate the Deputy President.

President Uhuru Kenyatta and DP Ruto have been at loggerheads since the beginning of their second term, with the President expressing frustrations about early presidential campaigns insisting that it was time to work for the people.

The ouster of the two leaders has been interpreted to signify that the relationship between the president and his deputy was irredeemable. On Wednesday, the Jubilee Party began the process of expelling 5 nominated senators allied to DP Ruto, for among other infractions, failing to attend the Senate PG hosted at State House on Monday, May 11. 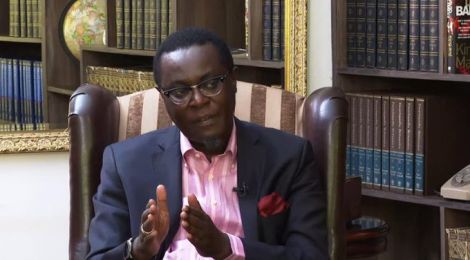 Mutahi Ngunyi speaking during the K24’s Punchline show on March 1, 2020.

Of late, the two initially warm political partners have also not been seen together in public, even during important events, lending further winds to the rumours of their collapsed relationship.

Inconsistencies in the Jowie-Eleanor relationship that is raising eyebrows – List